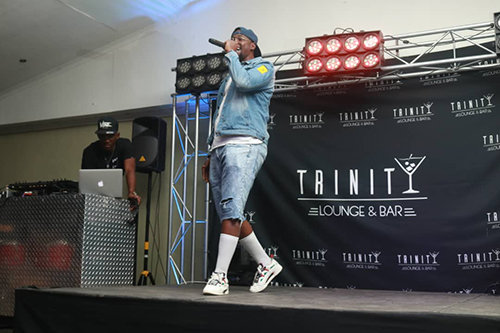 While pursuing studies to become a public relations practitioner, Alexander Siyaya Sikalumbu, better known as DJ Siya, is working on becoming a better person, and he dreams of seeing everyone prosper.

“My dream is to create a platform where we can help other artists to achieve their dreams too,” he told VIBEZ!

DJ Siya (38), who hails from the Zambezi region, joined the music industry in 2000, performing at lodges and clubs in his region.

He released a single, titled ‘Sigeje’, in 2011 – and that unexpectedly became a big hit in the region.

“In 2010, I thought of working on a song – but since it was the first song, it never came out of the hiding. In 2011, I approached my producer – my brother Mr Glo Solani Zulu – and that is when we came with a hit song titled ‘Sigeje’,” he said.

DJ Siya was exposed to the music industry by his two late uncles – John Mubyana Mutonga (Dusty) and Motsamai Motsamai (DJ Bolley) – and later caught the music tones of Bujo Mujo, who later became his inspiration.

The Unam student urged upcoming Namibian artists to continue believing in their dreams – to not be discouraged or misled by anyone, and to remain united and adjust to the changing trends and styles in the music industry all over the world.

Meanwhile, DJ Siya is gearing up to host ‘Zambezi Invades Windhoek’ on 6 November at Palm Tree Park in Windhoek with artists such as the legendary Spinny and Green Kids, Y Coasty from Zambia, DJ Vuyo, Umoya and DJ Mdu Firedrummer.

“Zambezi Invades Windhoek is an event that brings together the sons and daughters of the Zambezi region who are living outside the region, but everyone is invited. Let’s come and have fun. The region is rich in culture. We also, at the same time, are promoting our culture.”

Nostalgic… Siya performing at the Trinity lounge in Katima Mulilo