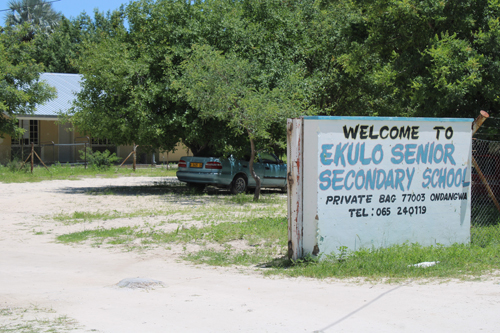 OMUTHIYA – Being isolated in hostel facilities for long periods has seemingly caused mental and anxiety issues for Oshikoto learners who have contracted Covid-19. Learners at Uukule Secondary School say they become mentally exhausted and anxious while in isolation.  The Oshikoto region has seen over 400 learners testing positive for Covid-19, leading to the suspension of classes at Uukule and Ekulo secondary schools.

Uukule principal Emily Angula said learners are bored as the only thing they do is eat and sleep while in isolation in their respective dormitories.

“Our learners are getting tired of sleeping, and it has become boring for them. Hence, we are hoping that the situation improves soon, so that lessons can resume. We are also fearing the worst in their performance, because the longer we take the bigger the workload,” said Angula.

With the closure of the school, Angula is concerned about the workload and pressure that will be exerted on learners when teaching and learning resume.

“Teachers will have to double their efforts to cover all contents in a short period of time, thus this means learners will be under pressure to master everything at once, which is not healthy,” emphasised Angula.

The principal further said grade 12 learners who were due to start lessons this week were told to stay at home to avoid congestion at school.

Another teacher at the school, who declined to be named, said the situation is not as critical as is being portrayed. The teacher was hopeful that health authorities would do everything in their power to get the situation under control to enable contact learning to resume.

Meanwhile, learners at Ekulo raised concerns about their mental state and school performance. “We are really tired. It is better they let us go home, we cannot start learning, because it serves no point as we sleep the whole day,” the learners told New Era.

“In fact, we still get mixed up with other learners during eating time and share ablution facilities. Therefore, we feel classes should resume, as the cases might still increase, irrespective.”

Not far from them, was another group, who were clearing the school grounds. The learners demanded to be provided with hand sanitiser and masks.

They also demanded more ablution facilities while they pleaded for the authorities to reopen the school for classes to continue.

“We have gotten used to this now, we panicked before, but all we want now is to learn as we endured a lot last year. We have thus seen the effects of the closures on our performance,” the learners stressed.

Despite a significant number of pupils testing positive in the region, Oshikoto health director Joshua Nghipangelwa said most cases were asymptomatic and no learners have been admitted to hospital in a critical condition.

Muinjangue added that everyone is still trying to cope and learn how to manage and live with the new virus. The highly trained social worker further said counselling among learners is needed to minimise trauma.

“When Covid-19 starts affecting people that you know, it gets worse, as opposed to when it is far from you. It is even severe for learners who are enclosed because they might be overcome by fear and anxiety. This state therefore affects concentration,” she said.

Moreover, the deputy minister said, she was aware of the shortage of social workers in the country, thus making it difficult to provide counselling to all learners and patients affected by Covid-19. “I therefore encourage life skill teachers to be actively involved,” she added.