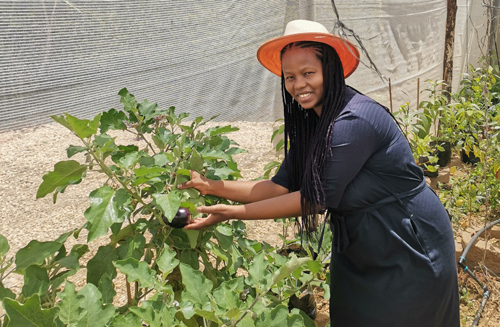 What started as a hobby in 2009 has now turned into a fully-fledged production for Ndawedapo Shaanika.
Ndawedapo, a qualified geologist, is the proud owner of a budding backyard garden in Windhoek’s low-density suburb of Suiderhof.
It is from here where the young professional has managed to carve out a niche for herself as a producer of a variety of fruits and vegetables.
She grows spinach, aubergine, marrow, chillies, peppers, gem squash, butternut, a variety of tomatoes, lettuce and carrots amongst others.
“I grow all types depending on the season. During the cooler months, I plant cauliflower, broccoli, cabbages, kale and brussels sprouts. I had to optimise space too considering we are living in town so I plant in containers as well.

“For fruits, we have lemon, orange and fig trees which produce fruit abundantly,” she said.
She noted that previously, she would give away most of her produce to friends and relatives, but with the onset of the Covid-19 pandemic last year an opportunity to trade in some of these produce presented itself.

“We used to give away most of the things I grow as most would rot. But with the pandemic, an opportunity presented itself such that we sell the lemons, make lemon juice and marmalade instead of allowing them to rot.”

Taking us back to 2009, Ndawedapo said her footsteps in backyard farming were mainly coincidental.
She decided to venture into backyard farming - which has been hailed the world over as a formidable means of providing for families in cities - after realising that she has a lot of idle space in her backyard.

That was in Rosh Pinah, at the start of her fledging career as a geologist.
“In 2009, I got a job at Rosh Pinah Zinc Mine and those days geologists were very much respected with respect to perks and benefits. So, as part of my offer, I got a big house with even a bigger yard and free water.
“Being single and very far from my parents, siblings and friends in Windhoek, I started using my backyard to supplement my vegetables,” she said.

At the time, she said, fresh produce was scarce as the only retailer at the town often ran out of them. Soon, the dream of venturing into this largely untapped market emerged, and Ndawedapo’s garden continues to grow – and so too her produce.
Since moving to Windhoek some two years ago, she has continued the practice from her current address.

“To this day, my old Rosh Pinah house has my avocados and mango trees still standing,” she quipped.
Ndawedapo said she does not sell most of her products, but rather uses them to supplement her family dietary and nutritional requirements.
She has big plans too; she intends to convert some parts of the family’s mahangu field in the north to grow mangoes and avocado as well as produce a variety of vegetables.

“Apart from the vegetables, I am also experimenting with growing mangoes, avocados, baobab and litchis, we had great success with the avocados and baobab and we are patiently waiting for the mangoes and litchis,” she said.
Ndawedapo, who is now employed as a geo statistician, was born in the old USSR during pre-independence Namibia. She grew up in Lusaka, Zambia and spent the latter part of her childhood in Windhoek.
Describing her passion for growing food, Ndawedapo joked that she believed that in her past life – if there ever is such a thing - she was a farmer.

She implored other women to venture into backyard farming, as it is a means to grow food and provide for the family cheaply.
“I am intrigued as to why Namibians don›t grow our own food, even if it›s just enough for you and your family. Growing up in Lusaka, I vividly remember how almost every household would have a small patch growing basic vegetables.

“We are told water and space is a reason, however, even container growing can feed a family with spinach, tomatoes, onions, etc,” she said.   She also advised that patience is a requirement in the business of food production, as things just don’t happen overnight.
“Some vegetables produce only after 90 to 120 days and this would require patience with watering, feeding and ensuring your produce is pest and disease free. In fact, I planted some asparagus in February 2020 and my first harvest will only be in 2022. Imagine that.”