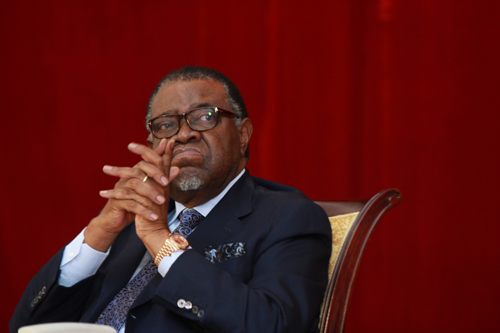 Geingob, who was addressing the nation on the Covid-19 response measures, broke his silence on the contentious issue, saying Cabinet, as a collective, decided to wound up the troubled national airline, whose current liabilities of N$3 billion have been described as “unsustainable”.
The liquidation of the airline comes amidst pressure from trade unions and the Swapo Party Youth League (SPYL), who have been petitioning Cabinet to reconsider its decision.

Geingob yesterday confirmed Cabinet, as a collective, reaffirmed the decision to liquidate the airline during its routine seating on Tuesday. “Air Namibia is a problem for all of us. We love it.

I am among one those who were proud to see that flag when landing at international airports. But the reality is a reality. We have a financial crisis. It is not just Air Namibia,” Geingob said when asked to comment on the issue.

The Head of State also hinted at the possibility of starting a “leaner and well-managed” airline in future.
“We have to look where we can cut – and if it is a wasteful thing like Air Namibia, we must address that. It doesn’t mean in the future we are not going to have a new leaner airline, well managed and so on. It is difficult to bail out Air Namibia,” Geingob reacted. Air Namibia had failed in its multiple recovery attempts despite several years of government bailouts, believed to be in the region of N$8 billion. Over 600 workers are set to lose their jobs.

The government said affected staff would continue to get their salaries for 12 months.
Commentators approached by New Era yesterday said the protracted debate on whether to bail out Air Namibia or not is nothing new.
Unam political science lecturer Rui Tyitende said it was important to note that Air Namibia is not the only irritating lice gobbling taxpayers’ funds.

“We have a plethora of state-owned enterprises that do not need to exist, as they have simply been established to further the ruling party’s patronage networks. CEOs and all those other executives with fancy and drawn-out titles do not add value to struggling SOEs, as their sole purpose is to earn a million-dollar or more salaries and live a bourgeois lifestyle at the expense of ordinary Namibians. This is unjustifiable and unsustainable,” Tyitende charged.

According to Tyitende, it is lamentable that the government has realised that the continuous bailout of Air Namibia is no longer sustainable amid a climate of discontent over other competing national issues. He further called for a serious review into the operational viability of struggling commercial SOEs to be conducted and a sustainable solution to be pursued.

Political analyst Ndumba Kamwanyah is of the view that the decision to liquidate the airline is irreversible at this stage, complicated by the dire economic situation.

“But we will not liquidate ourselves out of the current economic trouble if we don’t address the factors that caused the liquidation. What are we going to do with other entities? Liquidation, in itself, does not address the root cause of our economic trouble but merely postpones it. I think the focus should be on addressing the accountability crisis in our system and governance,” Kamwanyah maintained.

Economic recovery
During a heated debate on the status quo of Air Namibia in the National Assembly last week, finance minister Iipumbu Shiimi, who chairs the Cabinet Treasury Committee, emphasised that Air Namibia’s current debt is unsustainable and would jeopardise the national economic recovery plan that the government is currently seized with.

Shiimi stated the net economic costs of Air Namibia’s operations far outstrip the net gains and are thus unsustainable. It is estimated that so far, the government has spent more than N$8 billion on Air Namibia.

“At this stage, the country’s economy can no longer afford to perpetually provide financial support to Air Namibia at the expense of supporting economic growth and critical social services. It is, therefore, with that consideration that the government decided to file for the voluntary liquidation of Air Namibia,” he said, adding that the government considered all other options, which included engagement with other airlines for potential investment or partnership. Equally, he added, the government has also assessed various business plans to turn around the company.  - anakale@nepc.com.na