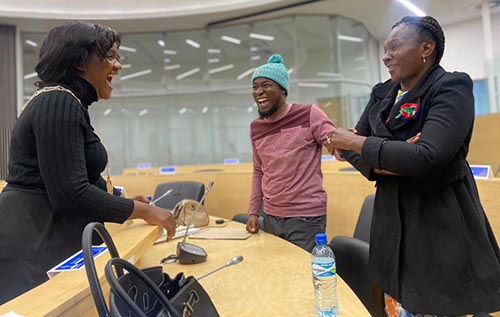 With less than five months before the annual election of office-bearers, behind-the-scenes horse-trading has gone into overdrive in the Windhoek municipal council.

The process to form a new coalition that will effectively dislodge the Independent Patriots for Change (IPC) and move them to the periphery of decision-making is spearheaded by the Affirmative Repositioning (AR)
movement and the ruling Swapo party, New Era understands.

The AR-IPC marriage ended after only one term when the IPC courted the Landless People’s Movement as coalition partner.

When Windhoek landed in the hands of the opposition back in 2020, the then coalition partners danced to an upbeat tune as expectation soared among residents.

Two years down the line, successive coalitions have failed to live up to those expectations.

The parties agree that the City of Windhoek has been reduced to a political battleground, as opposed to an institution mandated to deliver basic services to its residents.

They pin the blame on the IPC leadership’s interference in the day-to-day affairs of the city. The failure to appoint a substantive CEO and the travel ban on the IPC’s councillors are cited as some of the reasons why a new coalition is mooted.

“The management committee (MC) is dominated by the IPC. But IPC councillors are not allowed to travel. Travelling includes site visits and forming partnerships with
sister municipalities.

This means nothing will be happening if the MC is detached from the ground and only operating in the chamber,” a Swapo municipal councillor, who humbly requested anonymity, said.

Swapo is cosying up to the idea of forming a coalition with the opposition “because if this council fails, it is a collective failure, and the people will punish us at the ballot”.

“People don’t care who is mayor or who is running the MC. They care about service delivery,” the source stressed.

“The current crop of Swapo councillors have a good relationship with everyone. The problem is the IPC and their interference. The plan is to isolate the IPC, and work with everyone else in the interest
of our people.”

The talks are very discreet and highly classified, as some Swapo quarters “are not ready to work with Job Amupanda.”

When contacted, AR legal head Stanley Kavetu said the movement has not been approached by Swapo.

“We have not shown any interest. We will try advocating for things to be outside the MC and while not serving in any position. The principle decision is to cooperate,” he noted. Kavetu would not comment further. Despite this, another AR insider confirmed having had talks to dislodge the IPC-dominated
coalition. The idea was to have an AR mayor, PDM deputy mayor, while Swapo would take control of the management committee.

“AR did not want to seem desperate for positions, and we decided to
let the LPM, IPC and Nudo take charge while together with Swapo and the PDM, we could have been the majority,” the source confirmed.

But there are currently no formal talks, the source added.

“We see a warming up to the idea of bringing back AR to the coalition. We don’t think that approach is genuine or is based on service delivery. They have just realised that they have not done very well, and are also frustrated by the IPC,” continued the person briefed on the matter. It is AR’s position that the public must “judge for themselves when
we are not in, and when we were in. We will not be desperate. If those discussions come, we will discuss, but there have not been any tangible approaches.”

Contacted for comment yesterday, Windhoek mayor Sade Gawanas was unaware of new coalition talks. She said LPM leaders Bernadus Swartbooi and his deputy Henny Seibeb were better-placed to respond. “There are no talks whatsoever that I am aware of at this
point,” she responded.

She, however, conceded that the current coalition – Nudo, IPC and LPM – is  struggling to find common ground on key issues.

“There are a lot of challenges. We can’t seem to get on the same page on a number of issues a lot of times,” the mayor said.

Gawanas is a staunch advocate for the application of an independent mind to Windhoek’s issues while following laws and procedures in place.

“It is easier said than done. Any mayor or chairperson of the MC that comes into these positions will have the same challenges if we simply cannot sit and decide the key things that we want to achieve and agree to commit to that, regardless of our political affiliation,” she said. The mayor added: “But if everyone is going in a different direction or wants to control and disrupt, we are going to fail at delivering services.” Gawanas said she is yet to receive any official communication from the IPC regarding the travel ban of its Windhoek councillors.

“There are issues. There is politics. Interference issues. Control issues. They are endless,” she stated.

New Era also approached the IPC’s Ndeshihafela Larandja, Windhoek’s MC chairperson. She has no idea about any plans to topple her party, but has noticed a strange trend in recent times.

“In the chamber, during the deliberations, they [AR and Swapo] are pulling in the same direction. But one cannot confirm that they are actually planning to team up,” she said. She then dismissed claims that her party’s leadership was meddling in council’s affairs, and the city’s operational matters in particular.

Those who harbour those sentiments must provide evidence, she added. The IPC is represented by four councillors. On the travel ban, Larandja defended her party’s decision. “The party doesn’t believe in the unnecessary utilisation of funds which does not directly benefit the residents. One has to prioritise whether the activity is directly benefiting the residents or not,” the defiant councillor stated.

On the same day, a fired-up Imms Nashinge, the IPC’s national spokesperson, was also firm in their resolve, saying whoever wants to dislodge the party “must bring it on.”

“We are going to stand our ground. Our only interest is to serve the Namibian people. They must tell us what we are not doing right. We are not bothered by those talks…we don’t get oxygen from positions,” he said. Nashinge went on to say that the IPC is a national party, and cannot only be preoccupied with Windhoek’s affairs.

The IPC firebrand then took a swipe at those throwing stones at council’s decision to re-advertise the position of CEO, based on alleged irregularities.

Speaking to New Era yesterday, PDM secretary general Manuel Ngaringombe conceded that affairs at the opposition-led Windhoek municipality leave
much to be desired.

According to him, the opposition can succeed if they put ego and politics aside.

He blamed the collapse of the previous coalition on political trespassing and electioneering.

“You saw some councillors were being restrained. Decisions were being taken elsewhere, while some members of the coalition would discuss issues with non-members,” he said. As bad as things are, entering into a coalition with the ruling
Swapo party “must be the last resort”.

“All opposition parties must join forces. We must have clear-cut objectives of what we want to achieve. From there, we must allow councillors to do their work
without interference,” he reasoned.

“But if we can’t agree, then maybe we can talk about Swapo, as long as Swapo is genuine and not using us.”

He, however, hastened to add that the PDM was open to a coalition
with Swapo, if that is in the best interest of the city’s residents.

He then pointed to the Berseba and Tses village councils, where his party is in coalitions with Swapo
and the LPM.

In 2020, a Windhoek coalition was formed between the IPC, AR, PDM and Nudo. It was the first of its kind.

At the time, AR’s Amupanda
was installed as mayor. He was deputised by the PDM’s Claudia Hanases, while IPC and Nudo controlled the MC.

Things fell apart last year when the IPC, LPM and Nudo teamed up to form a new coalition.

The three parties now form the MC, while the position of mayor and deputy mayor are occupied by
LPM and Nudo councillors.

The IPC has four seats on the city council, while Swapo has five. AR and the LPM both have two seats, while Nudo and the PDM complete the 15-member council with a seat each.