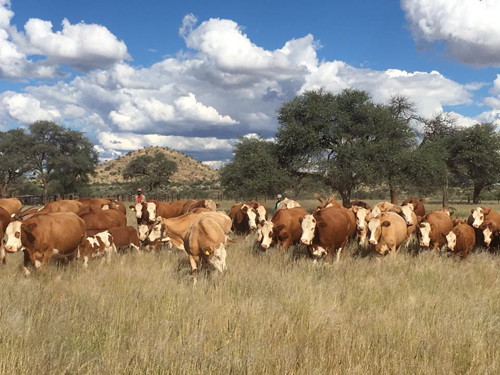 It’s been said that all that glitters is not gold. Transfer that thought to your pastures, and all that is green isn’t good — especially for your cattle.
Indeed, there are many plants that can cause illness, death, abortion, birth defects, metabolic disorders, photosensitization and other problems in cattle.
Many poisonous plants emerge in the dry season before grasses begin to grow.
Poisonous plants often gain an advantage over the grasses and if livestock are turned out too early, poisoning may occur.
AgriToday compiled this list of common poisonous plants for livestock found in Namibia.

DESCRIPTION: Dichapetalum cymosum, commonly known as gifblaar from Afrikaans, or occasionally its English translation, poison leaf, is a small prostrate shrub occurring in the northern parts of Southern Africa. It is notable as a common cause of lethal cattle poisoning in this region and is considered one of the ‘big 6’ toxic plants of cattle in Southern Africa.
Above ground, the plant is seen as a clump of small, woody shrubs about 15 cm (6 in) high.
Such a clump is typically a single plant, as gifblaar has a huge underground root system - likened to an underground tree - and sends numerous shoots above ground in favourable conditions.
The most obvious above ground parts are the leaves - simple, alternate with initially fine hairs later becoming glabrous. The leaves are bright green in colour on both sides.

DISTRIBUTION: Found in warm, usually dry areas. In grassland and sandy soil and on stony hills not in marshy areas or clay soils.

Drimia sanguinea is a distinctive, well known and highly poisonous bulb that has a deep-red colour. It has caused mass livestock mortality in the past and was subject to frequent land clearance by farmers.

Species of Dipcadi grow from small bulbs. The solitary flower stem (scape) bears a loose raceme of green or brown flowers, sometimes with different colours at the tips of the three inner tepals. The raceme is usually one-sided (secund).
The tepals are joined at the base for up to two thirds of their length to form a tube.
The apices of the tepals then curve outwards, particularly the outer three.
The outer three petals may have a rounded “spur” at their tips. The stamens, which are enclosed within the flower, are joined to the tube formed by the tepals and have flat filaments. The black seeds are in the shape of a disc or a flattened globe.
Just like most poisonous plants, the malkopui poisoning is common when grazing is scarce. The plant grows quickly after the first rains especially in September and October when there is very little else to eat.

Geigeria Ornativa are perennial with the woody rootstock. The bright yellow flowers are grouped in small heads, outer flowers are unisexual (only female), while the others are bisexual.
When livestock, especially sheep, eat a lot of this plant, paralysis of the oesophagus occurs, which may cause pneumonia.
The dried, older plants remain in the veld for many years, retaining its seeds, gradually releasing a few each season.
Geigeria causes a stock poisoning called ‘vermeersiekte’ causing huge losses in goat, cattle and sheep herds.
This disease causes vomiting then paralysis leading to the death of the infected animal. Levels of toxicity vary according to the habitat, rainfall patterns and plant growth levels.
Vermeersiekte is caused by overgrazing and an emphasis on maintaining healthy veld conditions, with reasonable grass cover combined with sensible grazing levels, appear to cure the disease.
There are some 17 species of Geigeria in Namibia, with most having a different appearance. It is widely distributed throughout the drier regions of southern Africa and Angola.

DESCRIPTION: Ricinus communis can vary greatly in its growth habit and appearance. The variability has been increased by breeders who have selected a range of cultivars for leaf and flower colours, and oil production. It is a fast-growing, suckering shrub that can reach the size of a small tree, around 12 m (39 ft), but it is not cold hardy.

DISTRIBUTION: Ricunus communis is a fast-growing shrub or small tree which is a highly prolific and precocious producer of toxic seeds, very adaptable to different environments and has been widely distributed by man.
It is reported invasive or weedy in many countries particularly in the tropics and since dense thickets shade out native flora it is able to have negative impacts on biodiversity.
-sourced from various agriculture publications