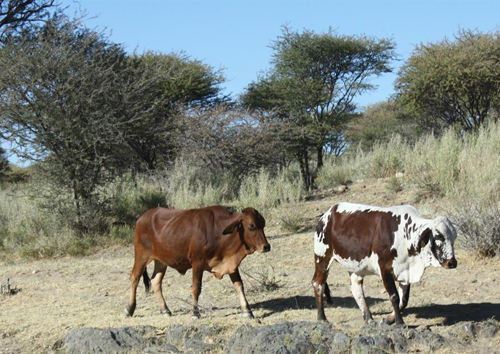 Namibia’s battle with Foot and Mouth Disease (FMD) appears to be far from over, as more animal movements restrictions are imposed.
The latest restrictions are for the movement of livestock and any related products in almost two-thirds of the Northern Communal Area (NCA), as the regions of Oshikoto, Ohangwena, Oshana, Omusati and Kunene are closed down.

This follows the outbreak of FMD in the Olukonda constituency of the Oshikoto region at the end of December 2020.  A statement from the Ministry of Agriculture, Water and Land Reform last week announced the movement restrictions of animals, which include all cloven-hoofed animals in and out of the affected areas.
In October last year, the movement of all cloven-hoofed animals and their products were banned after an outbreak of FMD was confirmed in the Kavango East region.
That ban remains in place.

The latest restrictions add to the burden of the already struggling agriculture sector, which is barely hanging on after a prolonged drought period.
Namibia is one of the most vulnerable countries to the effects of climate change due to the aridity to most parts of the country. Events resulting from climate changes such as droughts drive the majority of the population to poverty when they occur.
Drought spells have become a common feature in Namibia. In 2019, another drought hit Namibia and several resultant impacts made the news.

What is Foot and Mouth Disease?
It is a severe, highly contagious viral disease of cattle and swine. It also affects sheep, goats, deer, and other cloven-hooved ruminants. FMD is not recognised as a zoonotic disease.
The disease spreads very quickly if not controlled and because of this, it is a reportable disease.

The disease is caused by a virus of which there are seven ‘types’, each producing the same symptoms, and distinguishable only in the laboratory.
Immunity to one type does not protect an animal against other types.
The interval between exposure to infection and the appearance of symptoms varies between 24-hours and 10 days, or even longer. The average time, under natural conditions, is three to six days.

The virus survives in lymph nodes and bone marrow. It can persist in contaminated fodder and the environment for up to one month, depending on the temperature and pH conditions.

Airborne spread of the disease can take place and under favourable weather conditions, the disease may be spread over considerable distances by this route.

Treatment is not given. Affected animals will recover. However, because of the loss of production and the infectious state of the disease, infected animals are usually culled.

FMD is one of the most difficult animal infections to control. Because the disease occurs in many parts of the world, there is always a chance of its accidental introduction into an unaffected country.
Export restrictions are often imposed on countries with known outbreaks.

FMD outbreaks are usually controlled by quarantines and movement restrictions, euthanasia of affected and in-contact animals, and cleansing and disinfection of affected premises, equipment and vehicles.
Infected carcasses must be disposed off safely by incineration, rendering, burial or other techniques. Milk from infected cows can be inactivated by heating to 100°C for more than 20 minutes. Slurry can be heated to 67°C for three minutes.
Rodents and other vectors may be killed to prevent them from mechanically disseminating the virus.
Good biosecurity measures should be practised on uninfected farms to prevent the entry of the virus.

Vaccination can be used to reduce the spread of FMD or protect specific animals.
Vaccines are also used in endemic regions to protect animals from clinical disease. FMD vaccines must closely match the serotype and strain of the infecting strain.
Vaccination with one serotype does not protect the animal against other serotypes, and may not protect the animal completely or at all from other strains of the same serotype. Currently, there is no universal FMD vaccine.