Home / I love music so much - Blacky Bantwan

I love music so much - Blacky Bantwan 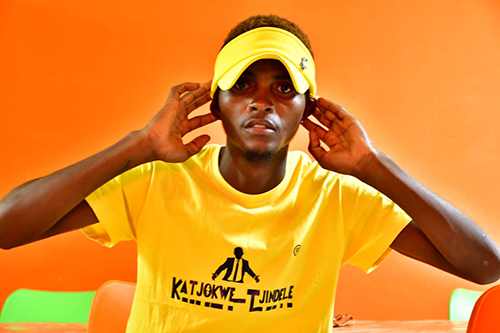 Upcoming kwaito, afro-pop musician Blacky Bantwan, real name Frans N. Haingura, recently released his EP ‘My Story’, serving as a taste of what his second album will sound like. He put together the five-track EP late last year, and it follows his first album ‘Usigona Wange’ released in September 2019.

“I decided to work on an EP because I just wanted to give my fans a highlight of what I’m busy doing and show a direction to the main album that is coming later this year. I thought an album deserves more attention and money,” Bantwan told VIBEZ!

The 24-year-old, qualified unemployed teacher said he received welcome attention when he collaborated with Top Cheri.  “As an upcoming artist, I’ve been getting much love and support from all over the Kavango West and East regions. They listen to my music, especially the one I did with Top Cheri. That’s the biggest project I have ever done in my life which made my name, Blacky Bantwan.”

He said Top Cheri is a great artist and working with her gave him extra musical experience, adding that he has learned a lot from her. The EP includes contributions from the likes of DJ Chronic, TKB and Ashwan, among others.

“Very soon, I will be dropping a music video for a song titled ‘Love me’. It was shot by GudShort films. I have a lot of major collaborations and still staying focused.”

Bantwan said he loves music a lot, and feels that he should be busy performing or doing studio sessions all the time. He, however, said he is still trying to find his feet in the music industry, and cautioned learners interested in pursuing music careers to tread carefully. “In our country, it is very difficult to focus on music and school at the same time, because it both needs full attention. Finish school, then focus on music,” he advised. Blacky Bantwan is signed under Suka Suka Entertainment. You can get his music on YouTube. His Instagram handle is Blacky Bantwan 5 and on Twitter @Blackybantwan.