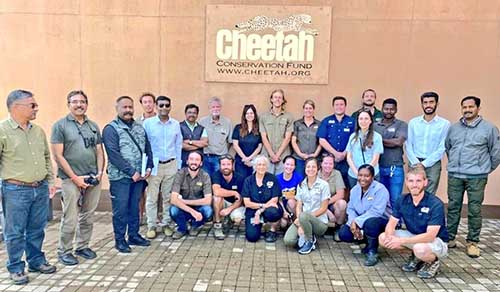 The Indian government has asked Namibia’s assistance to repopulate its extinct cheetah population.

A five-member delegation from India, comprising senior officials, experts and the environment ministry, the state of Madhya Pradesh, and the Wildlife Institute of India visited Namibia from 18 to 22 February 2022.

India’s high commissioner to Namibia, Prashant Agrawal, said this would be a wonderful friendly gesture by Namibia in the year when India is marking the 75th anniversary of independence, and these cheetahs would be no less than Namibia’s goodwill ambassadors in India.

“India is prepared and ready, and we are hopeful of achieving this by mid-2022 while partnering with our close friend Namibia on this important project, which would be a historical landmark in global conservation efforts,” he added.

Cheetah is said to be the only large carnivore that got completely wiped out from India, mainly due to over-hunting and habitat loss. The action plan by the Indian government highlights the nation’s preparedness in bringing the land mammal back.

The conservation of cheetahs has a very special significance for the national conservation ethic and ethos. The very name ‘Cheetah’ (Acinonyx Jubatus Venaticus) originates from Sanskrit and means ‘the spotted one’.

Deliberations to bring the cheetah back to India were introduced in 2009 by the Wildlife Trust of India, where experts from across the world and government officials met and decided to conduct site assessments to explore ways of going about the situation.

Namibia is known to be the first African country to slot in the protection of the environment into its Constitution, and the government has strengthened this by giving its people the opportunity and rights to manage their wildlife through communal conservancies.

“We wish to build on bilateral collaboration on environmental protection and biodiversity conservation, and make it a key part of our strong and diverse multi-dimensional relationship with Namibia,” stated Agrawal.

“The Kuno National Park in Madhya Pradesh has been identified as the first site for the project. Necessary preparations and resources allocation in this regard have been done by authorities. The site has no human settlement, and is ready for the introduction of cheetahs with minimal inputs.”

Some other sites examined by experts have also been found highly suitable, and their restorative management is underway for future use.

According to Namibia Endless Horizons, people are living with wildlife, including predators and large mammals, and are managing their natural resources wisely.

The Cheetah Conservation Fund (CCF) states that cheetahs are famous for their speed and agility, but are also one of Africa’s most endangered big cats. Their numbers have declined by 90% over the past 100 years, dropping from 100 000 to less than 10 000.

The main reasons for the decline are human-wildlife conflict, disappearing habitat, and loss of prey.  psiririka@nepc.com.na