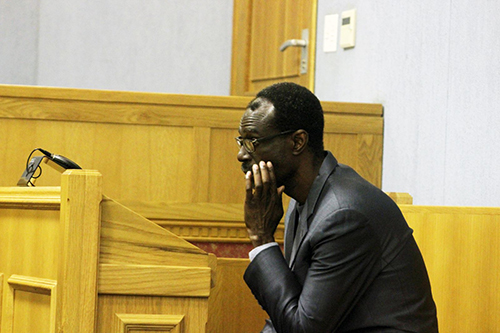 It is D-day for murder-accused senior government official Likius Valombola who stands accused of murdering student leader Helao Ndjaba in May 2018.

Windhoek High Court Judge Claudia Claasen is expected to deliver her judgment on the murder trial of Valombola, who is also employed by government as commissioner of refugees. The verdict was postponed from 8 October to today after Claasen indicated that she was not ready. It is alleged by the State that Valombola (57) shot Ndjaba (25) in the head in cold blood in Windhoek’s Ombili location on 18 May 2018. At the start of his trial in June, Valombola denied guilt on all counts.  During the trial, he admitted to having fired two warning shots, which could possibly have caused the death of Ndjaba. Valombola told the court that he fired two shots about 10 seconds apart when he was accosted by three people who were banging on his car door. At the time, he said, he was afraid for his life and the lives of his wife and son who were in the car with him.

Although having fired the shots, he denied he had intent to kill Ndjaba. Valombola’s version was corroborated by his wife Ndelitungapo Valombola and son Mathew Valombola during their testimonies.  His lawyer Sisa Namandje submitted during arguments that Valombola should be acquitted of all charges. He claimed that the State had failed to prove beyond reasonable doubt that a bullet found in Ndjaba’s skull during the autopsy was fired from Valombola’s gun.

According to the post-mortem, Ndjaba was shot twice in the forehead, with the entry wounds of the two gunshot injuries next to each other. The report stated that there was one exit gunshot wound in Ndjaba’s skull, and one bullet point was found in his skull as well.

The State, represented by Ethel Ndlovu, gunned for a conviction in the case. She argued that the evidence presented by the State is not so bad that it cannot sustain a verdict of guilty, and that the contradictions in the witnesses’ testimonies is not so material that it can be classified as unreliable.

Down syndrome knows  no class