Kakololo gunning for glory in Ukraine 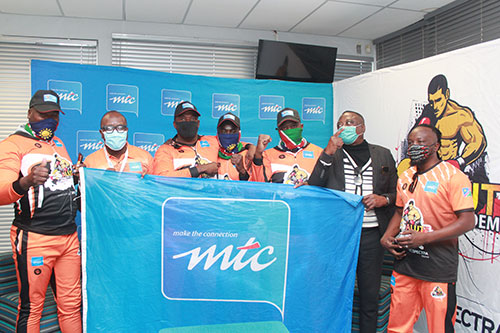 Kakololo will this Saturday go toe-to-toe with Ukraine’s Oleg Malinovskyi for this title at the AKKO International Arena in Kiev, Ukraine.

The pugilist and his team left for Kiev yesterday as they prepare to do battle against the undefeated Malinovskyi.

“I am asking all my fans to support me as I go into this big fight. Come Saturday night, I will deliver, and it will be a victory for me on the night. To the nation, I believe I am carrying the national flag on my shoulders as I head to Ukraine, and I am 100% ready to bring the title home,” said an upbeat Kakololo.

He currently holds a record of 11 wins, one draw and one loss, while his Ukrainian opponent boasts an incredible record of 27 wins from 27 fights.

Kakololo, who fights under the MTC Salute Boxing Academy, was accorded a warm send-off yesterday during a press conference in the capital, where sponsors MTC and his camp wished him luck.

“I remember at our first press conference as the MTC Salute Boxing Academy, I told myself that I will one day win a big title for my stable. Looking at where we are today, I can assure you that we are headed in the right direction, and we are close to bringing that title home,” he added. His handler, Kiriat Kamanya, said it is good to see what the stable has achieved and the direction they are headed in, emphasising that during their inception as an academy, they always wanted to reach such heights, and it is evident that they are moving in the right direction.

“We all should rally behind him as a nation to ensure that our support carries him through as he heads into this huge fight of his career,” he noted.