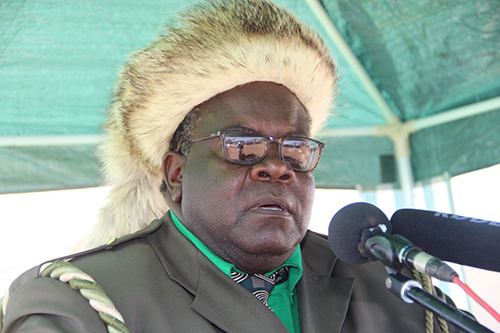 The application by late Ovambanderu chief Kilus Nguvauva, in which he challenged government’s decision to recognise chief Turimuro Hoveka as a traditional leader, has hit a legal bump in the road as the latter attacks the State’s amended notice of motion.

During oral submissions yesterday before High Court Judge Thomas Masuku, Dennis Khama lawyer of Peya Mushelenga, then Minister of Urban and Rural Development and President Hage Geingob, noted that the rules of the court do not permit sole and automatic right to amend notice of motion without following proper procedures as prescribed.

Thus, the court ought to strike out and/or set it aside with cost.

“The applicant (Ovambanderu Traditional Authority) was only entitled to amend its notice of motion on issues that concern the sixth respondent (Hoveka Traditional Authority). The relief or issues that the applicant has covered in its amended notice of motion are new reliefs or issues that are sought against or relate to the alleged decisions allegedly taken by the first and second respondent (the minister and president),” said Khama.

In their amended notice of motion dated 27 January 2021, Ovambanderu Traditional Authority (OTA) sought court orders to declare the establishment of the Hoveka Traditional Authority, its chief and councillors, as a direct result of government’s recognition of Hoveka as chief, null and void.

In the first notice of motion, OTA only sought an order that would review and set aside Mushelenga’s decision to recognise Hoveka as a traditional leader and declare it invalid.

OTA further sought a court interdict that would prohibit Hoveka from establishing a traditional authority in respect of members of the OvaMbanderu Traditional Community (including the Hoveka clan) inhabiting Eiseb Block, Epukiro, Otjombinde, Aminuis, Otjinene, Opuwo and Gam.

Nguvauva filed the application in September 2019 before his death on 1 July last year.

His lawyer, Natasha Bassingthwaighte argued that government does not indicate what prejudice they will suffer as a result of the “irregular steps”.

Bassingthwaighte said they were clear when they applied to the court to be allowed to amend their notice of motion, which is to deal with the establishment of the Hoveka Traditional Authority.

“It is clear that the only purpose of the rule 61 application is to prevent the merits of the application from being heard. This is not the purpose of rule 61,” said Bassingthwaighte.

She further added no real prejudice exist in them amending their notice of motion.

On 23 November 2018, Mushelenga recognised Hoveka and his traditional seat, and the Hoveka Royal House, as a traditional authority in the jurisdiction of Eiseb Block in Otjombinde constituency in the Omaheke region.

It was Nguvauva’s argument that the Hoveka clan is one of the clans that make up the OvaMbanderu and the area alleged to be occupied by Otjimana community, which is represented by the Hoveka Royal House, falls within the jurisdiction of the OvaMbanderu Traditional Authority.

Adding, Mushelenga’s decision could encourage more clans within the OvaMbanderu to break away and establish separate traditional authorities.

Mushelenga, who is opposing the application, indicates having read the documents that accompanied Hoveka’s application for recognition, it is evident the Otjimana Traditional Community had in fact established a traditional authority, colloquially called the Hoveka Royal House.

Hoveka, who is also opposing the application said there is no dispute that the Hoveka Royal House is comprised of OvaMbanderu, and the Otjama subjects are scattered all over Namibia. Moreover, the OvaMbanderu clans have never been under a centralised leadership.

Hoveka indicated that Nguvauva’s application is an attempt to achieve central power over communities that do not resort under him.