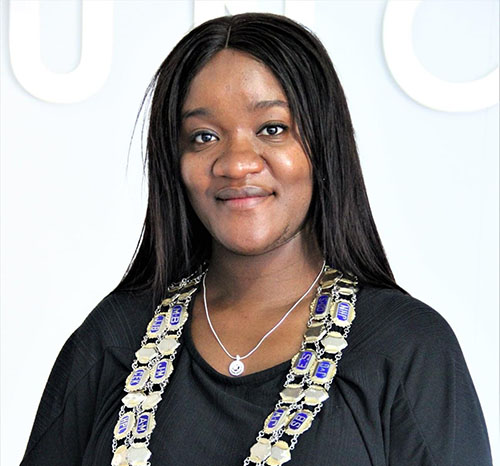 In 2019, Sade Gawanas took a huge gamble by resigning from her full-time airline hostess job at Air Namibia to pursue a political career. Plucked from relative obscurity, the former Miss Namibia 2007 second princess went on to contest for a National Assembly position.

But this was not to be as her party, the Landless People’s Movement, only managed to amass four seats for the August House. However, there was some consolation for Gawanas in 2020 after emerging as one of the two LPM leaders chosen to serve on the City of Windhoek local authority council where she became an ordinary councillor.

But as fate would have it, Gawanas yesterday prevailed as Windhoek mayor, replacing firebrand Affirmative Repositioning movement activist-in-chief Job Amupanda. She will be deputised by Nudo’s Joseph Uapingene. Gawanas profited from the Windhoek “progressive forces” coalition collapse, which was made up of the Independent Patriots for Change, AR, and the Popular Democratic Movement (PDM), to emerge as a strong candidate for mayor.

In fact, AR and PDM abstained from voting yesterday, paving way for IPC to dominate the seven-member management committee. Born and bred in Windhoek, the 33-year-old Gawanas has already demonstrated, including during clashes in public with Amupanda, that she was no pushover. Ironically, Amupanda was among the first to congratulate her yesterday. In her acceptance speech yesterday, she encouraged the battle of ideas among councillors, saying disagreements should be based on issues affecting residents.

“We have to be tough collectively on corruption, fraud, irregularities, nepotism, favouritism and the negative culture. We have to be committed to efficient service delivery. We must balance and constantly relate our decisions to the realities of our communities,” she stated.

She also promised business unusual as far as public engagements are concerned. “We as your governing council, have reiterated the need to have five to eight meetings in each constituency, reaching out far and wide as possible. Social media should not be our only means of communicating, but we must be in the streets, engaging the City of Windhoek.”

Land a priority Gawanas has also promised to tackle the land question, saying it is an issue that needs to be prioritised and addressed with vigour.  “We have to continue creating and maintaining local, regional and across the board partnerships, have a friendly approach towards investors and create a conducive environment, for business to thrive and investment to grow and investors to feel secure and comfortable enough to invest within Windhoek,” she said. In his final speech as mayor, Amupanda strongly spoke out against corruption wwwithin the City of Windhoek.

“There are some corrupt officials within the City of Windhoek and as we speak, we have 8 000 flat accounts that generated about N$8 million per month that are bypassing the electricity. These people are doing so with the City of Windhoek officials,” he charged. Amupanda also questioned the competence of the local authority’s councillors, whom he claimed some were captured by officials within the city.