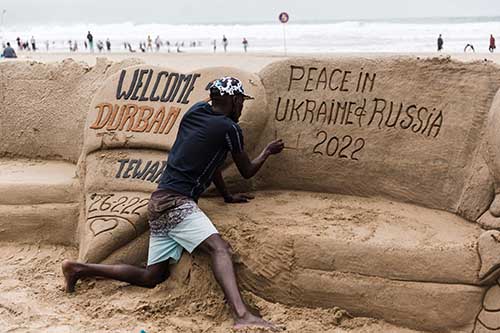 International relations minister Netumbo Nandi-Ndaitwah has urged Namibians in Ukraine to flee to neighbouring countries such as Poland where they can seek refuge and be assisted by government.

This follows after Russia last week launched a special military operation against Ukraine, arguing that it was defending the Donetsk and Lugansk People’s Republics, which broke off from the eastern part of Ukraine shortly after the 2014 coup in Kiev.

“The focus now is to leave Ukraine. It is extremely difficult for us to think we can arrange transportation within Ukraine, and that is why we are pressing upon our nationals to make an effort and go to the nearest country,” Nandi-Ndaitwah told New Era yesterday. “We should not create an illusion among our people to say the government will make arrangements while they are in Ukraine, it is practically difficult.

But once they get out of Ukraine, then we will be able to facilitate.” Ukraine hosts about 100 Namibians, including 92 students spread out across the country.

Nandi-Ndaitwah added that the Namibian government is working closely with the Polish authorities and other neighbouring nations to accommodate Namibians as they try to find their paths home.

The Polish government has given foreigners 15 days’ stay.

“Poland and Hungary have allowed us to give a free pass to our nationals and because of the high route in Poland, we have sent our immigration and defence attaches who are normally based in Germany to assist our nationals as they arrive,” she added.

“We will make all the necessary arrangements, particularly for those who want to come home; we will facilitate that process. The consul in Hungary is on its toes to assist where they can.”

She said only one student has so far arrived in Hungary, while three others who were stuck at the Polish border have now safely arrived in Poland. At the time of going to press yesterday, a number of Namibian students were still waiting in long queues at the border, while others were still en route via buses and trains.

The welfare of African students in Ukraine has prompted certain organisations to come forward in aiding with what they can to bring them back home. The Popular Democratic Movement (PDM) Youth League, through its branch in the United Kingdom, said it will be assisting students who are seeking flights back to Namibia via Poland from Ukraine.

“This intervention is necessitated by the grave conditions under which these students currently find themselves after the Namibian government fails to intervene promptly in repatriating them back,” said acting secretary general Yvette Araes.

She added that due to the enormous monetary costs involved in this assistance, the PDM Youth League is also pleading with members of the public who wish to make contributions towards the flight tickets of these students to do so.

The Swapo Party Youth League insisted the Namibian government was doing everything possible for students stranded in the Ukraine. The Namibian mission in Germany has sent out a notice to Namibians in Ukraine, informing them to whom they should communicate before or once they have reached Poland for accommodation arrangements.

“South Africa being the only SADC country with a diplomatic mission in Ukraine has agreed to Namibia’s request to assist and work together with the Namibian nationals for a safe evacuation,” the youth league said in a statement. “Let the nation desist from following unrecognised outlets, and let us wait for additional updates from the government’s relevant authorities such as the Ministry of International Relations and Cooperation regarding the situation in Ukraine and the evacuation of our people from there.”

Meanwhile, Russia said yesterday that after some back-and-forth, Ukraine agreed to dispatch a team to Belarus for talks to end the Russian military campaign in the country. RT reported that Kiev “confirmed” the planned talks in Gomel Region, which is close to the borders of both Russia and Ukraine, Russian chief negotiator Vladimir Medinsky told reporters. Medinsky, an aide to President Vladimir Putin and former culture minister, added that the parties are now deciding on the logistics and the exact location of the summit, with “maximum security” for the Ukrainians. “We guarantee that the travel route will be 100% safe. We will be waiting for the Ukrainian delegation,” the Russian chief negotiator said. -Additional reporting by RT