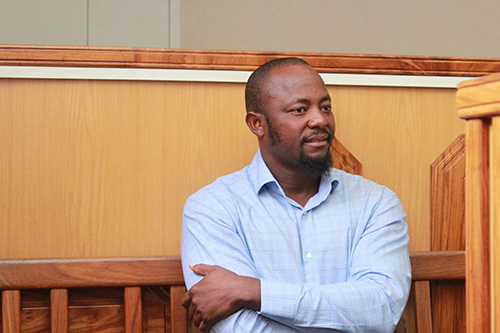 Former CEO of the National Fishing Corporation of Namibia (Fishcor) Mike Nghipunya was instrumental in the negotiations to sell the entity’s lucrative quotas to third parties.

This is contained in an affidavit by Jose Ramon Canosa, who was the general manager of fishing giant NovaNam. According to Canosa, Nghipunya was the person he negotiated the price for the hake wet quota with, and they agreed on a price of N$4 600 per metric ton, while the agreement was that he would pay the money to Seaflower.

However, he said, Nghipunya approached him later with a new payment schedule, proposing to present him with two invoices, one from Seaflower and one from another company with both the same value, and said that he should pay the second invoice.

This, he said, was to protect them both.

These invoices, he added, came from Wanakadu Investments, Gwanyemba Investment Trust and Fine Seafoods. Nghipunya has an interest in all of these entities, according to the State.

He also proposed that the second invoice be structured as management, facilitation and consultancy fees, Canosa stated. Canosa, however, denied any discussion about these entities providing such services to NovaNam.

The six men together with Bernhard Esau, Ricardo Gustavo, Tamson Hatuikulipi and Nigel van Wyk, are facing more than 40 counts, including racketeering, contravening the Anti-Corruption Act, conspiracy, corruptly using an office to receive gratification, fraud, theft and money-laundering, as well as defeating or obstructing the course of justice.

Also on the list of people added to the charges is Namibian lawyer  Marén de Klerk.

The State is yet to extradite De Klerk from South Africa, as well as Icelandic nationals Ingvar Júlíusson, Egill Helgi Árnason and Aðalsteinn Helgason.

The State alleges that all the accused acted in common purpose. The matter continues today.