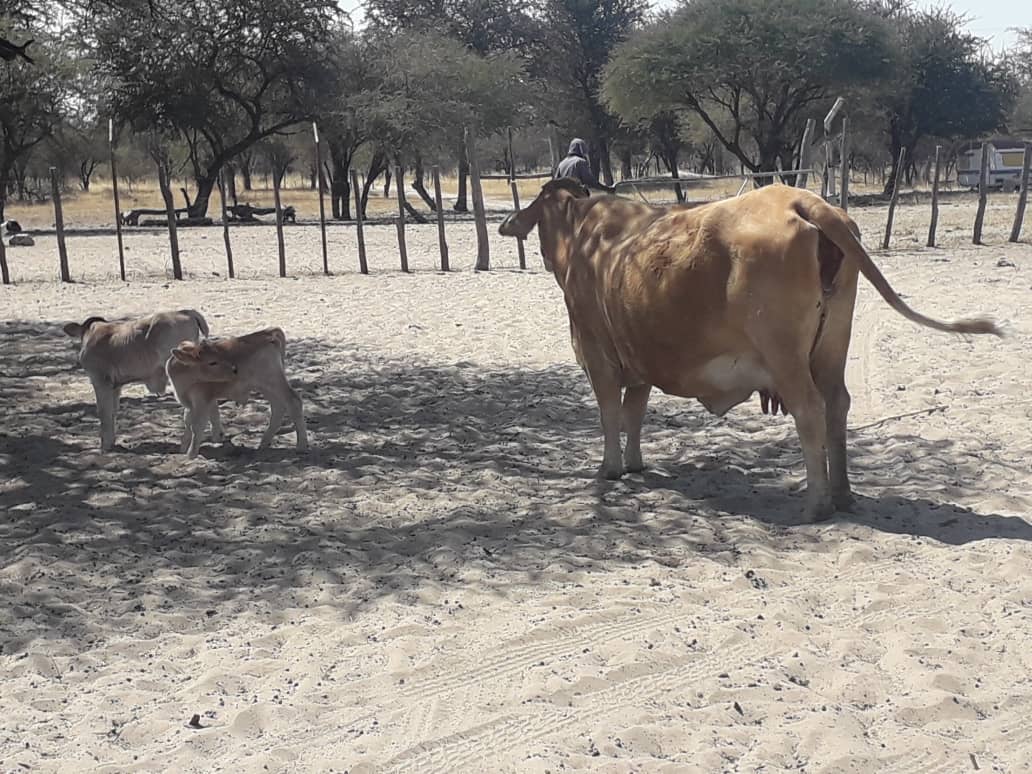 Breeding with cattle and expecting a calf each year from the cows is not a given, as some cows simply do not conceive each cycle. But farmers go about their daily activities believing that this will happen and that their stock will be increased.

It, therefore, comes as a blessing to the farmers when a cow finally gives birth as it signals another addition to the herd. It is, however, nothing short of a miracle when a cow gives birth to twin calves.
Politician-turned full-time farmer Erwin Nashikaku has become the talk of the village after the relatively rare phenomenon of twin calves occurred in his herd last week.

Among many, this is considered a good omen that could lead to greater advancement of the herd in general.

“I feel so much rewarded as a result of the care and effort we put in maintaining the farm, particularly on the production. This of course happened to be my way of celebrating the achievements of the two athletes Beatrice Masilingi and Christine Mboma, who participated at the recent Olympics.

“This also coincided with the 80 birthday of President Hage Geingob, so I really feel proud about my investment and hard work,” said Nashikaku, who farms at Omtswegwondjaba outside Omuthiya.
He adds; had the calves been female, he would have named them after the young sprinters.

Naskikaku told AgriToday he last saw such an occurrence in the early 1980s.
“I first saw it during the era of my late father in 1984. Having started full-time farming in 2013, this just came at the right time and I am really excited,” he said.

The calves are from his Simbra herd, which he had introduced recently into his overall herd.
Nashikaku said he strongly believes in feeding the livestock, coupled with overall correct nutritional supplements in order to obtain best results.
“I don›t joke with my animal diet. I believe in correct diet and general handling such as treatment and keeping up with vaccinations. Farming has become my life in order to put bread on the table as well as producing more to feed the nation, he said.

Despite the seemingly good prospects of his farming activities, the farmer said he is still battling with water for his livestock, as the underground water meant for his animals is saline and not fit for the purpose.
He is therefore forced to fork out a lot of money to service the huge water bill resulting from his use of household water for the animals.

But, he is not relenting - at least not any time soon.
“My achievements come as a result of physical commitments including waking up every day early mornings to see the well-being of animals before I give directives to my hard working team on the farm

“My supporting spouse who is very committed to do research on nutrient feeding and what vitamins to give, has contributed meaningfully to this achievement,” he noted.