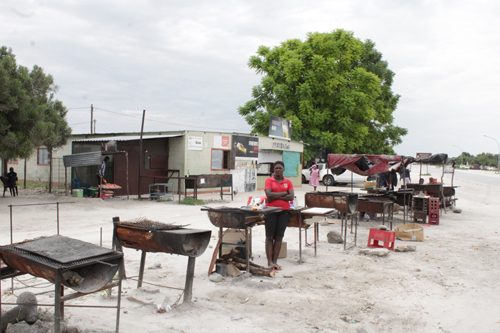 OMUTHIYA – Kapana traders at Omuthiya say they have been hard hit by the government’s decision to restrict animal movement and slaughtering in January due to the prevailing foot-and-mouth disease outbreak.

Since the restriction was imposed, the vendors say, they have depleted their savings, while some are struggling to get back on their feet.
However, the agriculture ministry recently eased some of the restrictions on slaughtering and movement of goats and sheep. The authorities plan to lift restrictions on cattle movement next month.

“Despite being allowed to sell goat meat, many of us are still finding it difficult to get back on our feet as it’s expensive. We have used all the little money we had to enrol our children in school and to feed our families as well as cultivate the fields,” said local trader Nangula Titus, who added she was now trying to make a living by selling chicken gizzards.

The Omuthiya open market, which is usually a hive of activity, has seen little trading of late. There are about 23 stalls but only 10 are operational, a sign that the majority no longer have an income.

“As much as few of us are trying to push, our efforts get derailed when it rains. There is completely no business at all. Therefore, our appeal is for veterinary officials to allow us to slaughter cattle subjected to inspections. Otherwise, we will be suffering, and we do not have food for ourselves at our homes. The meat in the butcheries and shops is way too expensive to resell,” a worried Monika Nandjembo said.
Meanwhile, during a tour to the northern communal areas (NCAs) last week, agriculture minister Calle Schlettwein said cattle movement and meat products are still not allowed.

“Slaughtering is not a problem, but movement of meat to another place is prohibited because it might carry a risk of transporting the infection to other areas,” he said then.
The vendors are now asking the government to establish some funding scheme to help those that are adversely affected as they are unable to start selling again.

Another appeal was to be allowed to slaughter and sell under strict supervision from veterinary officials.
“Government should really intervene and help in this regard. We have tried selling gizzards and chicken in an effort to stay afloat but there is no income generation, while buying from the butcheries is not an option as it costs more for less,” added Angu Shimanya.
–  osimasiku@nepc.com.com.na