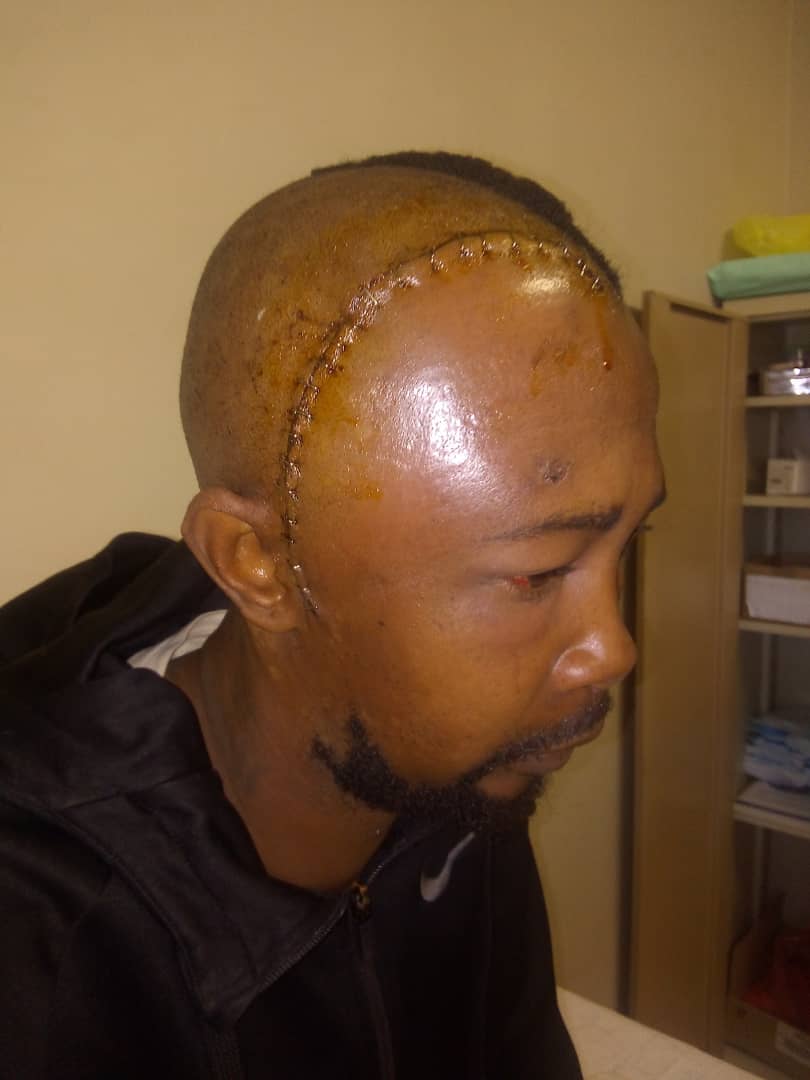 The family of a Katutura man who landed in hospital after he was apprehended accuses the police of brutality, but the officers say the victim jumped from a moving police vehicle. It is alleged that Kenneth Oscar Gariseb, known as Barney, sustained extensive injuries all over his body after he was picked up by the police and returned home disorientated and unable to talk. The victim’s brother, Robert Gariseb, said the incident occurred on the night of 13 August 2021 when Barney went to visit his cousins at their grandmother’s house in Ovambo location. He said when it was close to lockdown time (22h00), the brother and cousins decided to and go buy food at the Hakahana service station opposite the Jan Jonker Afrikaner High School.

“On their way back, which I presume was after the curfew, they passed by a group of law-enforcement officers conducting a stop and search on another vehicle around the area known as Tavern near the Ovambo location bus stop, while they were travelling in a sedan car of one of his cousins. As they were passing this routine stop, someone in the cousin’s car opened a window and shouted something in the direction of the law-enforcement officers. They continued home and sat down and continued socialising in the yard. After a while, the same police vehicle passed the house, and again there was an exchange of words between the group and the officers, at which point the police turned their vehicle (a combi) around and approached the house. Upon entering the yard, they started slapping and pushing around the people. My brother Barney was taken by the police officers,” he explained.

“The family never heard of Barney again until the next morning when he checked himself out of the Central Hospital between 06h00 and 07h00. He went straight to his room to sleep. The cousins got worried and started making calls, only to find out he was home. The family members got worried and went to his room to wake him up, upon which they discovered the extent of his injuries.

“As they woke him up, they noticed that he was badly beaten all over his body; no space was spared on his body to inflict the most harm they could. He was disorientated, and didn’t respond well when people called his name. At this point, the family decided to take him to hospital,” he continued.

Barney was apparently just dropped off at the hospital by police officers who didn’t offer any details as to how he got the injuries, or where they found him.

“The police were the last people who had an interaction with Barney when he was healthy and had all his faculties with him. He now has difficulty remembering what happened after the police took him away. This can be attributed to the head injuries he sustained. No matter what he did or say to the police, does it warrant beating someone half to death to the point that they end up having brain surgery to save their life?” he asked.

According to Denice Garises, a niece of the victim, her uncle did not yet open a case because he needs to obtain a J88 form from the hospital. She said the police have done an injustice by causing severe physical damage and trauma to her uncle.

“Doctors determined that he had sustained severe head trauma, blood had reached his brain and an operation to his head had to be performed. But because his blood pressure was too high, they couldn’t operate immediately that morning. He underwent surgery that afternoon (14 August), and by Sunday 15 August, he was in the intensive care unit, where he spent the rest of the day.

The Namibian Police’s George Mahoney told New Era that the preliminary investigation into the matter shows that the victim was arrested for a violation of the curfew, and jumped out of the moving vehicle. He was transported with four other suspects.

“All I can confirm to you is that we are fully aware of the matter, but the police are not responsible for his injuries. He injured himself when he tried to jump out from the vehicle because he refused to go back to custody,” said the commissioner.

Sources from the police claim that the victim is a well-known offender.

Commissioner Mahoney said although the police are not aware of what case the victim will open, it is his prerogative to do so.

Garises denied that her uncle has a criminal history, and said he is an unemployed man hustling to feed his two children.