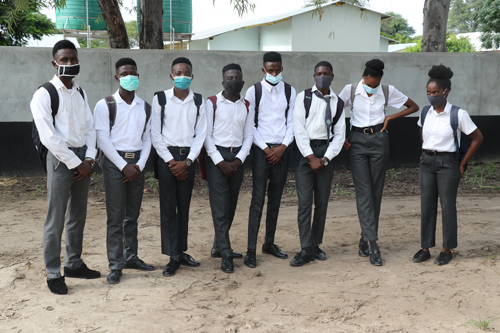 KATIMA MULILO – Some learners at the Caprivi Senior Secondary School in the Zambezi region were sent home yesterday because of “inappropriate” hairstyles.  Learners not branding a school logo on their ties were also excused from classes.
The learners could be seen wandering the Katima Mulilo streets and outside the school premises.  They narrated how they were told to go back home.

“I commuted from the village but upon arrival, I was informed that I could not enter the school due to my hairstyle. I was told to go back and get a haircut,” said one of the learners, who refused to be named.

“I have no choice but to just wait for my father, who will come around lunchtime to pick me up in order for me to inform him about why I was chased out of the school. They never had any problem with our hairstyles the previous years and never said anything about it on our first day at school.”

Another learner, who was sporting a “bolla” with her natural hair, stated upon arrival at the school, she was told to back and braid her hair.

“Is my hair not okay? Not having a tie is also another reason; we just opened yesterday (Tuesday); where will we get money to buy a tie, as some of us are orphans. I live with my aunt, who was retrenched from her job last year,” claimed the learner, who added she used the little money to buy stationery.

“Yesterday (Tuesday), I was chased and told to go and buy a ream of paper and then pay N$26 to register. That is almost N$100 and that is the money I should have used to buy a tie. How can they say ‘go to your mother’s place’, while I came here for education. I have been at this school for almost three years, but I have never received even an exercise book; what free education is this?” she lamented.
Another learner with the same hairstyle shared a similar sentiment.

“The teacher said the same thing to me about my hair and I asked her if I can do it tomorrow, but she said ‘just go back home’, but my hair looks nice; they should have just allowed us in with a warning. It is January and parents do not have money. There are a lot of kids in town who were chased out. Imagine a teacher telling me that that I apply cream on my skin just because I am light in complexion; how can she say something like that?” said the disappointed learner.

One of the parents, who preferred anonymity, told New Era her daughter was denied entry to the school premises for failure to display the school logo on the tie.

“She called me when she got home to inform me of what happened. Where can I get it if it is out of stock?” the visibly agitated parent questioned.

Attempts to get clarity from the school management were initially shot down by a female teacher, who was also not pleased with the media taking pictures outside the school premises.
The teacher accused the media of violating rules and regulations of the school.

“You cannot go in someone’s house and tell them how to do things. There are rules and regulations that should be followed – and those learners who were chased know the reasons why they were chased,” said the visibly irritated teacher said.
Contacted for comment, school principal Richard Musilizo let it slip that he was aware of the situation and invited the media to visit the school for clarity.

When he was made aware the team was there but were denied entry, he said: “You should have done something wrong to be denied entry”.
He again extended his invitation to return to the school. However, upon returning to the school, the principal was nowhere to be found, and his mobile phone went unanswered.