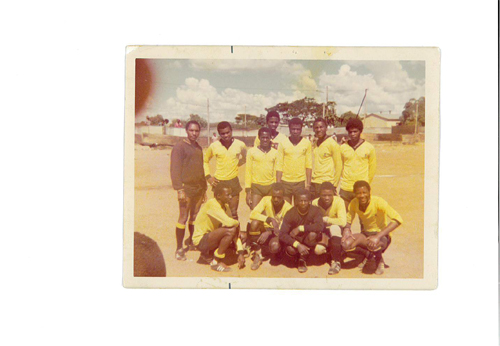 Back in the day, the vastly populated residential area of Katutura boasted a significant number of high-profile football teams that dominated domestic football. One of the most prominent football outfits from Windhoek’s old location Cape Cross made way for the unavoidable birth of Dolam-based outfit Pirates FC.

The newly formed team under the stewardship of hotshot striker Wherrick Zimmer-Goreseb, became a major force to be reckoned with and ranked amongst the leading football entities in the business.
Apart from evergreen Simon German Tsigeib Gariseb and ageing serial net buster Uerivara Zimmer, the gold and black strip outfit had the likes of Erich ‘Bomber’ Hansen, Anton ‘Safe’ Kuruseb, John Hans, Zebulon ‘Brazello’ /Haoseb, Issaskar ‘Sky’ Kuvare and the flamboyant Afro-haired ‘Zorro’ /Haoseb in her armory.

And as much as Pirates were made to live in the shadow of their more celebrated neighbours Rocco Swallows, Jungle Boys, Ramblers Katutura (Ramkat), Orlando Pirates and Black Africa, the gold and black strip outfit were no pushovers.
Dolam Pirates instilled fear in their opponents with their traditional tight marking, tough tackling, and developed an intimidating habit of questioning almost every single decision that went against them. Many teams dreaded coming face to face with the uncompromising Dolam outfit.

A product of Windhoek’s old location, ‘Zorro’ was a committed one-team man and completed his marathon football journey with Pirates FC, the authentic ‘Dolam Boys’.

He was part and parcel of the fearless now defunct Pirates squad alongside stalwarts Wherrick Zimmer-Goreseb, Simon Tsigeib Gariseb, Sky Kuvare, Erich Hansen, Safe Kuruseb and many others. Bro ‘Zorro’ went on to oversee several generations during the club’s transformation at the dawn of multi-racial football in 1977.

A deadly old-fashioned centre forward, ‘Zorro’ was a menace to many defenders and goalkeepers alike. The Jairzinho lookalike endured himself into the hearts of many a neutral fan with his eye-catching goal-scoring prowess as he singlehandedly led the Pirates firing line with great aplomb alongside the bulky Erich Hansen and tallish Otavi-born flying winger Issascar Kuvare. Pirates were amongst the most feared teams in the late sixties and early seventies and were always amongst title contenders in the highly competitive Central Football League under the auspices of the South West Africa (SWA) Bantu Football Association.

With no proper records available about log standings and league champions, it remains a tough challenge to determine the team’s overall performances and titles won, apart from a few knockout cup tournaments. To make matters worse, most knockout cup tourneys ended prematurely in chaos because of fist fights over shoddy referees’ decisions. The serial absence of goalpost nets gave the teams carte blanche to have legitimate goals chalked off at the slightest provocation, arguing that the ball did not cross the goal line through the goalposts.
Despite all those hiccups, the game of football was enjoyable as it kept divided communities together with no other recreational activities taking place apart from chasing an inflated piece of pigskin leather.

Nonetheless, oral history reveals that Pirates won several high-profile knockout cup tournaments. In the meantime, ‘Zorro’s’ unmatched thunderbolt shots, pace and ability to pop in behind unsuspecting defenders made him a real thorn in the flesh of many opposing man-markers in years gone by.

The likeable former Pirates number 9 had honed his football skills in the dusty streets of Windhoek’s old location. “We used to kick around with inflated plastic balls behind the Roman Catholic Mission School football field,” recalled Zorro during an exclusive interview with New Era Sport in 2010.

Some of his celebrated teammates were Pieter Plaatjies, Ouman Doeseb and Lemmy Special Narib. In no time, he joined forces with boyhood buddies Daniel Wimmert, John Eichab and Walter Hansen to form Dangerous Point FC. “We used to compete fiercely in stake games against Hot Stars and Fire Flames from Damara one and five sections respectively.”

And when Pirates were short of a player for a particular knockout cup tournament in Karibib, they turned to ‘Zorro’ for divine intervention. The young attacker announced his arrival on the big stage with a five-star performance, netting all three allocated penalties in the final to become an overnight club hero.

He found himself surrounded by established stars such as Absalom Goseb, Mandla Hanstein, Izaak ‘Whoops’ Gariseb, Willem Hans and his brother Albertus. His remarkable performance did not go unnoticed as he was rewarded with a call-up to the star-studded Central Invitational Eleven against their Northern, Western and Southern counterparts in several exhibition matches.

Regrettably, the birth of both Orlando Pirates and Black Africa had a negative impact on the strength of Pirates as a significant chunk of their playing personnel jumped ship to join the newly established clubs. Bro ‘Zorro’ was amongst very few footballers to have played in all their respective clubs’ official matches uninterruptedly without suffering any serious injuries in their blossoming football careers. Upon his premature retirement, ‘Zorro’ became a staunch Orlando Pirates supporter. May his soul rest in power.