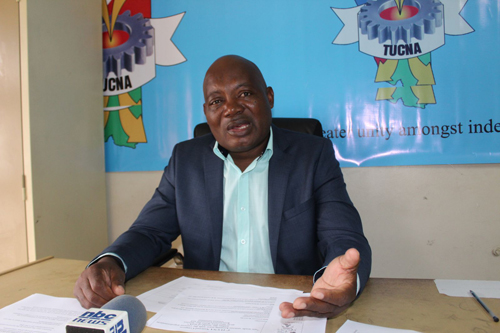 The Trade Union Congress of Namibia (Tucna) has accused labour minister Utoni Nujoma of discriminating against them after the umbrella worker’s union was left out of the ministerial committee on the national minimum wage.

According to Tucna president Paulus Hango, the process was done behind closed doors and they were not informed, adding that Tucna and affiliate unions only heard about the appointment of committees through the media.

Hango told journalists yesterday they were informed that Nujoma only appointed one official who is in the employment of the Namibian Public Workers Union (Napwu).

“National minimum wage is a very serious issue, and it affects the lives of thousands of workers – one person cannot represent the interest of all the Namibian workers,” said Hango.

He claimed it was unfair for Tucna and its affiliates to be excluded from the process, particularly in the appointment of the committees.

He also noted that appointing one person from the union of the public sector leaves the lives of many to be compromised, adding that the appointed person cannot represent workers in the informal sector.

He said public workers have stable employment and many of them earn more than what will be a minimum wage in Namibia.

“We will reject the outcome of the national minimum wage because we know it will not improve the lives of many Namibian workers,” he said yesterday.

Furthermore, Hango said the minister’s appointment of the committee was not done according to the labour law, saying section 107 of the Labour Act 11 of 2007, requires trade unions to nominate a person who will represent their interest.

“If the ministry continues with its discrimination policy and exclusion, Tucna will take appropriate action to detect and protect workers from exploitation. Although Namibia has political freedom, the majority of our citizens still battle with economic freedom, and this is clear from the level of unemployment [and] glaring income inequalities,” added Hango.

Hango outlined that the wrong national minimum wage approach will destroy workers’ lives and is more likely to increase inequality.

Tucna wants a minimum wage that would ensure that workers are not exploited by the capitalist for self-enrichment. Nujoma was not available for comment yesterday.