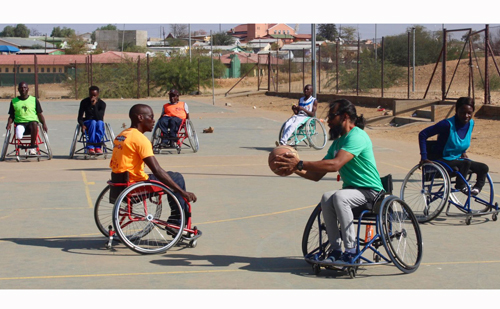 The president of Namibia Wheelchair Basketball Federation (NWBF), Issac Nailenge, said one of their core goals for 2021 is to reach out in order to ensure more people are involved in the recently formed sport discipline.
NWBF was formed last year August, after an intensive training camp was conducted by British expert Ryan Raghoo, aimed at honing the skills of the participants and to expose them to high wheelchair basketball workouts.

The ultimate objective was to assemble a national wheelchair basketball team that will represent the country at this year’s inaugural Africa Paralympic Games in Morocco, Namibia Paralympic Committee secretary general Michael Hamukwaya told this publication last year.
So far, the federation has been operating with about 50 players, and the president said that they would like to reach out to more people so they can get involved in the sport.

“When we started we had less than 10 people and so far, we can see a slight growth in numbers. We have 22 players in Windhoek, 20 in Oshana, and 18 in Ohangwena. We are growing with time,” he said.
“Our main objective for this year as a federation is to get more players of all ages from all corners of Namibia to join the federation, I think it is an exciting sport to partake in. If you look at the way most players have grown the love for the sports, it is quite amazing.”
Nailenge also said that at the moment the federation has been having various online training courses to educate and give more insight into the sport, which has also seen different players acquiring coaching certificates.

Despite the growth that has happened in the last couple of months, Nailenge says that sponsorship remains a stumbling block for the federation. He further called on local corporate companies to get on board and assist where they can.
“Growth has been amazing, if it wasn’t for Covid-19, things would be way better. But sponsorship has been one of our stumbling blocks, which has caused things to move slowly. Our players do not have good wheelchair tyres, but if there is anyone willing to help, they can do so,” he added.
- mkambukwe@nepc.com.na