Home / Your culture is your currency – Maponga

Your culture is your currency – Maponga 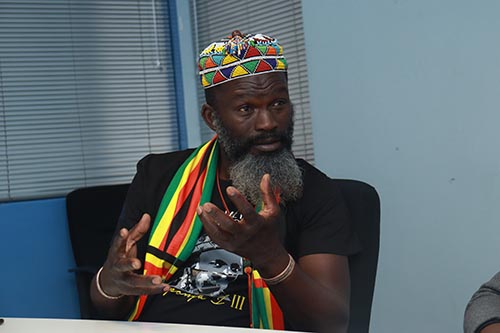 Renowned motivational speaker, philosopher, musician and social entrepreneur bishop Joshua Maponga says people are socialised to think culture is evil, but there is potential in it.

Maponga was speaking to New Era after arriving in the country on an African tour, promoting ‘A Night with Bishop’, an event set to take place at the National Theatre of Namibia on Friday, with the focus on leadership, transformation, culture, heritage and fusion of African music including local artists.

He stated when people behind the culture start using the sector as a development tool, chances are that money will be circulating in the economy, instead of the current way, where people are patronised by colonialism and supporting their brands.

Maponga is starting his tour in Namibia, followed by Botswana, South Africa, Zimbabwe and Egypt before heading out to Germany. “Why not start in Namibia: don’t you guys have stories? And this is telling me another thing that we don’t need to undermine and sideline one another as Africans,” he said when asked why he is beginning his tour in the Land of the Brave.

He added: “Namibia has stories, the reparations, the displacement of people, the OvaHimba people, Bushman, Khoisan and the issue of civilisation extinguishing sacred historical people because of colonisation and development. You are killing your society and destroying this history to disappear on the face of the earth and never to be remembered again”.

The leader said what he wants to raise here in Namibia is that amid the obsession with civilisation, it is important to preserve, particularly the minority groups, who don’t want to be ‘civilised’.

“They don’t want to go to school; they want to live their lives the way they have been living. The best technologies we can find are inculcated and embedded in some of these indigenous knowledge systems. A Bushman builds nothing, owns nothing – and humanity living in nature is the highest technology,” stated Maponga.

The Zimbabwean-born speaker is passionate about community development and has worked with several large organisations, something he wants to continue doing and be remembered by.

“I want to be remembered as that person who added variety to the thinking space. There is a danger to stereotyping – the thought patterns of society. How many geniuses do we throw away from the academic system because they cannot pass mathematics and science because they cannot meet up with the colonial mindset,” he deliberated.

Maponga said by not giving much thought and consideration to the importance of culture, a community destroys so many potential businesses, adding that young people needed to be exposed to culture to stimulate the different frameworks of thinking.

He is also a well-known television personality, who hosts the show, Joshua, on Dstv channel 33.

He started his career as a pastor with the Seventh-Day Adventist Church.

Maponga has served as a Christian minister in South Africa and other African nations, including Zimbabwe, Lesotho, Nigeria, Kenya and Botswana.

Maponga worked in the corporate, religious and social sectors for a number of years. Many people refer to him as a creative powerhouse because of his unique and vibrant way of thinking. He is the CEO of the Institute of Farmers of Thought, which is another project where he mentors young people.

“It is a thinking process institution where we are identifying for the African child the wealth that they have – whether we are planting the religion into the minds of the African, education or culture,” said Maponga on the mission of the institution.