2020-03-04  Emmency Nuukala
A struggling and unemployed mother of four said she had contemplated taking her own life and that of her children in the past in order to escape poverty.
View more

2020-03-11  Emmency Nuukala
Four Icelandic journalists who uncovered what is now known as the Fishrot scandal and which led to the arrest and detention of former fisheries minister Bernhard Esau, his justice counterpart Sacky Shanghala and five others have been awarded the Union of Icelandic Journalists’ 2019 Bladamannaverðlaun for Best Investigative Reporting for their coverage of the bribery saga.
View more

2020-04-16  Emmency Nuukala
No mercy… The Windhoek City Police yesterday set up a number of roadblocks in an effort to dissuade movement as part of measures to stem the spread of Covid-19. Government this week announced the current lockdown would be extended nationwide until 4 May 2020. Traffic officers dished out warnings and requested those who are essential service providers to always have their permits on them. Photo: Em
View more

2020-04-28  Emmency Nuukala
???????Curbing the spread…Namibian entrepreneur Sylvanie Beukes passes through a disinfecting chamber that he constructed together with partners, Abed Nakalenga and water specialist Sidney Beukes. The trio built the locally manufactured hands-free disinfectant chamber, which they hail as first of its kind for Namibia.
View more

2020-05-18  Emmency Nuukala
Shot in the arm… The Namibia Institute of Pathology (NIP) last week received a much-needed donation of N$4.8 million from the Social Security Commission. The money will be used to procure reagents and other necessities to help scale up the country’s Covid-19 testing capability.
View more

2020-09-09  Emmency Nuukala
A family of 10 from the Oshitenda informal settlement on the outskirts of Windhoek is living in the open after mysterious fires continue to torment their four-bedroom home since 26 August this year.
View more

Living on the edge of poverty

2020-09-23  Emmency Nuukala
The United Nations Population Fund (UNFPA) yesterday endorsed deputy information minister Emma Theofelus, who will be joining other A-list celebrities for the MTC Knockout Project in aid of efforts to address homelessness in the country.
View more

2020-12-11  Emmency Nuukala
B.O.S.S (Boundaries Order Structure and Support) Riders Club recently held a charity drive where they handed out care packages containing educational toys and other goodies to more than 50 children living with disabilities in the Goreangab informal settlement under the theme ‘Ride for Smiles’.
View more 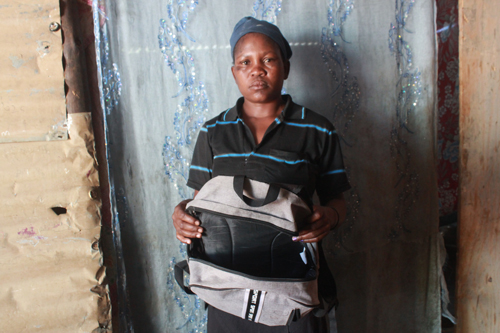 Struggling family at mercy of neighbours

2021-03-01  Emmency Nuukala
“Must I now go to school stinking?” This is a question Eldorado High School grade 8 learner Tangeni Ndondi continuously asks her unemployed mother, who, at the same time, is struggling to support herself and family.
View more

2021-03-24  Emmency Nuukala
Beatrice Brock, a 24-year-old medical student, during the pilot phase on Friday became one of the youngest Namibians to receive the Sinopharm vaccine, donated by the Chinese government.
View more

2021-04-15  Emmency Nuukala
With frontline workers given a choice between the Sinopharm and Covishield Covid-19 vaccines, the latter seems to be a favourite at the Katutura Intermediate Hospital.
View more

2021-04-20  Emmency Nuukala
Farmers in Omitara and surrounding areas in the Omaheke region are frustrated and at their wits end with the increase in stock theft.
View more

2021-05-07  Emmency Nuukala
Woodcarvers await ‘promised land’ When Paulinus Oscar and five other men from Kavango set up shop on a piece of land near the truck port in southern Windhoek, it was just endless bush in sight.
View more

2021-05-17  Emmency Nuukala
The sound of laughter and dust fills the air, as a group of children at the settlement of Dordabis play soccer in the streets. Amongst them is 11-year-old Timotrio !Auxab.
View more

2021-05-20  Emmency Nuukala
Over 100 seven-seater drivers yesterday brought traffic in Windhoek to a standstill to protest the annulling of their licenses as transport operators.
View more