Home / A heart for serving people

A heart for serving people 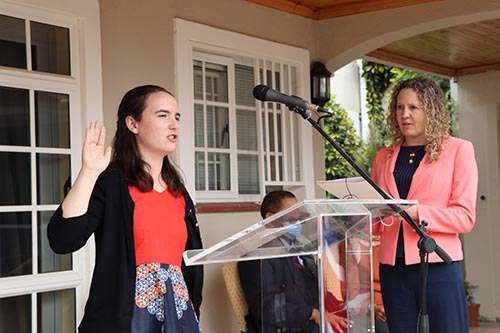 Growing up, Crissy Hendrickson didn’t know what she wanted to be and when asked about her dreams and aspirations, she had no answer but one thing was for sure – it had to involve helping people.

Years later, to honour that pledge, she decided to become an American Peace Corps volunteer. Hendrickson said in her role as an education volunteer, she would help the younger generation of Namibians to become entrepreneurs, business leaders, scientists, doctors, nurses, community health workers and more.

Asked about her focus area, she told Youth Corner: “There is nothing I am focusing on for now, but when I get to a school, I will need to find out what is important to them, and how I can support it.”

Having been in Namibia since May this year, Hendrickson is also eager to lend a helping hand to the new groups of volunteers who will be coming to Namibia in the coming months, saying she benefitted so much from the mentorships of earlier volunteers when she was starting, and would like to help these new volunteers understand how they can be successful here as well.

She is one of more than 1 800 American volunteers who have come to Namibia since 1990 to work in various sectors, including education, health and economic development.

They serve two-year assignments, during which they live and work in Namibian communities, learn local languages, including Afrikaans, Khoekhoegowab, Otjiherero, Oshindonga, Oshikwanyama, Rukwangali, Rumanyo and Silozi, and integrate into the cultures as they work to advance the priority development aims of communities.

The US Embassy’s Charge d’Affaires Jessica Long said Peace Corps is a special part of the overall US presence in Namibia, and in many ways, a cornerstone of the friendship.

“The US-Namibia relationship is strong and diverse, and it is built upon people-to-people connections. After the U.S. recognised Namibia’s independence in 1990, a memorandum was signed so that Peace Corps volunteers could assist in Namibia’s development,” stated Long.

She said during Hendrickson’s swearing-in ceremony in May that volunteers’ experiences and insights will be different from other Americans. “As you re-engage in your service, it is important to reflect on the significance of the perspective that you will gain as you deepen your understanding of the language, eat the same food, take the same transportation, and ‘go deep’ to integrate and help improve the lives of your neighbours”.