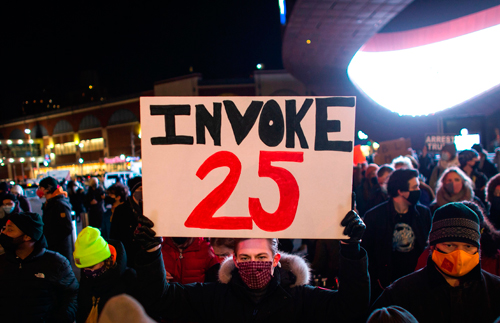 Local commentators have added their voice to the global outrage at the storming of the US Capitol building by angry supporters of US President Donald Trump last week Wednesday, saying it exposed the fragility of that nation’s democracy.
At least five people were killed after scores of Trump’s supporters attempted to stop a peaceful transition of power to US president-elect Joe Biden.

The riot forced the suspension of a joint session of Congress to certify Biden’s electoral victory. International relations minister Netumbo Nandi-Ndaitwah at the weekend condemned the “unwarranted” action.
“Namibia, therefore, expresses its condolences to the families of the deceased and the entire American people on this loss.

We, therefore, call on the Americans to continue strengthening their democratic institutions and processes to ensure a smooth transition of power to president-elect Joe Biden come 20 January 2021,” Nandi-Ndaitwah said.
According to Nandi-Ndaitwah, Americans have democratically elected Biden as their next leader following elections held on 3 November last year. Therefore, she stated, in the process of democratic elections, it is now a foregone conclusion that Trump, who is the incumbent, lost the democratic elections to Biden.

“America is one of the oldest known democratic systems and is always at the forefront to condemn when uprising perceived threatening democracy occur anywhere in the world,” she said.
She said it was shocking that a sitting president had incited an uprising tantamount to staging a coup. Former Swapo Party Youth League (SPYL) leader Elijah Ngurare, who also studied in the US, maintained the western nation was one of the most fortified places and sacred home for democracy in the world.

“Sadly, and with utter dismay, to a friend and foe, on the 6 January 2021, Trump, the sitting President of the United States of America, cheered on his supporters into Capitol Hill and a mayhem of Mantambo ensued,” Ngurare said.
According to Ngurare, the US lost its moral high ground on many fronts as a result of the mob violence witnessed last week. Ngurare added Trump has effectively shown the world that the US is and has been just like any other country where dictatorship is possible and where racism is still the norm in 2021.

“After all, the simmering racial discontent of whites (the majority in the USA) is what propelled the elections of Trump four years ago. And it will be naïve to wish him away. He was voted by over 80 million Americans. Come 20 January 2021, Donald Trump will no longer be president. Some want him gone before that date. It is a possibility. What will not go away is that there are people of his type in the USA. All eyes are Biden and Kamala Harris. We wish them well as they navigate the mines of discontent in the USA. It is not going to be easy,” he wished.

Another commentator Omu Kakujaha-Matundu also accused the Trump administration of fanning the flames of latent racist sentiments.
He said Trump’s racist rhetoric found an already fertile ground prepared by the struggling global economy since the 2008 economic meltdown, and the perceived degrading of the white middle class and hence white privilege. He added the storming of the Capitol building was not surprising.
- anakale@nepc.com.na