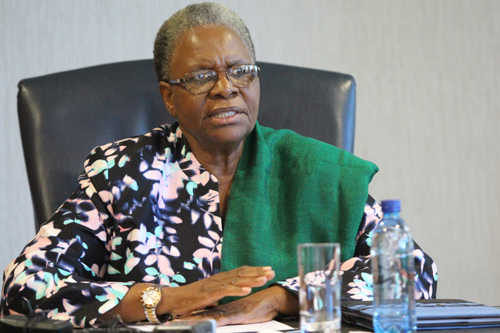 Agriculture minister Calle Schlettwein believes the year 2021 will be a difficult one but that should not make the nation despair. He said there is a need for all to stand together and forge ahead with efforts to improve the health environment as well as the economic situation in the country.
“Agriculture offers the best chances to bring about economic growth and food security or self-sufficiency, and also to create jobs, considering that 70% of Namibians are directly or indirectly dependent on agriculture,” he said recently when asked to comment on the expectations of the new year, which has been dubbed as the Year of Resilience by President Hage Geingob.

Deputy Prime Minister Netumbo Nandi-Ndaitwah welcomed the head of state’s message while urging both the private and public sector employees to work hard and pull through the year of resilience.
Nandi-Ndaitwah echoed Geingob’s sentiments that Covid-19 negatively impacted the economy with job losses as a result of the dreaded pandemic.

“The government had to direct most of the resources to tackle the pandemic. The year 2020 was a difficult year as it was compounded with the Covid-19 pandemic which saw businesses close down and job losses,” she indicated.

Political commentator Ndumba Kamwanyah said it does not necessarily mean that Namibia will recover, or it is on its way to recovery in the ‘Year of Resilience’. According to Kamwanyah, there is a need to follow up with concrete and tangible actions, saying action is what makes a difference. He also believes the theme is befitting, considering the dire situation in which Namibia finds itself due to the Covid-19 pandemic.
“We need a theme that psychologically rallies us, as a nation, to fight back and pull out from the current difficult situation. Therefore, in that sense, it is a motivating theme to rally us. However, themes are what they are, beyond the psychological motivating element, mere slogans, and don’t implement themselves. For them to have meaningful impacts, there needs to be a purposeful action in terms of policies, programmes, and activities,” Kamwanyah said.

Geingob recently said the new year brings with it a new promise of renewal and a new dawn of hope. The President implored Namibians to start a new page by rekindling the spirit of perseverance, solidarity, and compassion, adding the spirit of solidarity and resilience is what defines all.
Geingob said the year 2020, which he had declared as the Year of Introspection will go down as one of the most tumultuous in modern history.
“Although we were pushed to the brink, we did not break. That should be the enduring consideration, which we must carry into the New Year, 2021.

One does not know one’s true strength until one is pushed to the limits. If 2020 taught us one thing, it is the Namibian spirit of bravery, resilience, perseverance, and persistence in the face of adversity,” he said.
With socio-economic activity slowing down, Geingob stated the optimistic economic prospects government had anticipated for the year 2020 came to nought.

The Central Bank has estimated an annualised real GDP contraction of 7.3%, while the country’s deficit is estimated to balloon to beyond 10% of GDP. “This level of an economic recession is like nothing we have faced as a nation since independence in 1990. It is unprecedented.
Covid-19 has had a seismic effect not only on our local economy but the global economy as a whole,” he remarked.
-anakale@nepc.com.na