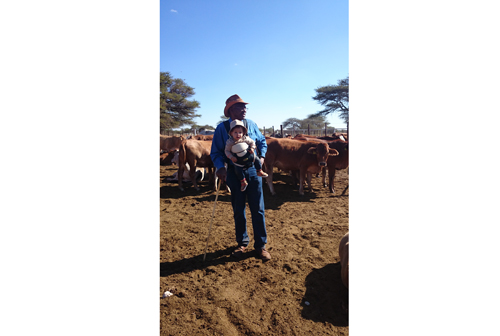 You may know him as a diplomat or the speaker of the National Assembly, but when you do not see him on TV, Peter Hitjitevi Katjavivi is usually busy riding horses at the farm, a hobby that has run through the family generations.
The 79-year-old candidly said his love revolves around family and there is nothing else he would prefer to be surrounded by other than his wife, children, grandchildren and just the family in general.

He said: “While at the farm, I sometimes enjoy riding a horse. Horse riding is a hobby that has run through our family generations, as my Uncle, the late Fritz Zaire, was a well-known horse trainer and owner of a famous racehorse named Kosambo. I also discovered that horse riding is good exercise for one’s body. I also read or watch sports. My favourite past time is playing with my grandchildren”.

“I have five children, who are now grown-up men and women. Jefta Kavesorere – a retired policeman, Ingrid Uanaingi, who works at the Bank of Namibia, Patji Haakon – a senior medical doctor based in Oslo in Norway, Perivi John – film-maker and visual artist Isabel Tueumuna.”
With his children’s impeccable academic accolades, it is not shocking that Katjavivi obtained a Doctorate of Philosophy from the University of Oxford in the UK.
Before that, Katjavivi was and still is a pride alumnus of the Augustineum Secondary School, which was known as a teachers’ college back then.
“I am one of those who were schooled at the Augustineum College in Okahandja, along with President Hage Geingob, Katuutire Kaura, Hidipo Hamutenya, Mosé Tjitendero, Dr Thomas Ihuhua, Pumootu Muundjua and many others. Our political consciousnes was sharpened while we were at Augustineum”.

MEANING IN THE NAME
“Hitjitevi means, what shall I do? This was my father’s first expression when he heard that he had a baby boy. Katjavivi means putting matters diplomatically. Derived from Greek Petros, Peter means stone or rock; it’s a biblical name.

WHAT’S IN THE KITCHEN?
He is mostly a tea drinker. “Mainly tea. Depending on the cup, with one teaspoon of honey, preferably. I also have a cup of coffee during the morning with milk but no sugar”.
His favourite meal is roasted chicken, combined with rice and sweet corn. “My favourite meal is what I used to prepare for my wife while I was still at university as a student. At the time, she would commute a long distance to work and return home exhausted, and I didn’t want to let her cook. This meal constitutes a roasted chicken, combined with rice and sweet corn – and sometimes a bit of salad.”

DID YOU KNOW?
Katjavivi was a middle and long-distance athletics runner. “I am a former athlete. If I had been born after Namibia’s Independence, I could have won Olympic medals for the country. During my early days in exile, I used to run for eastern Nigeria in the 1960s. Quite often, even now, my staff struggle to keep pace walking beside me when I am in a hurry to attend to an urgent matter.”

AN AVID READER
“I often spend my weekends at the farm, whereas as a family, we also have targets to achieve. Over and above these commitments, I am also writing my life story, and I enjoy reading. I have recently been reading three books: The Magic of Perseverance by David Magang, a former Minister in the Government of Botswana; Death, Destruction and Disappearance by David Smuts, one of our Supreme Court judges, and Finding Common Ground on Land, Equity and Agriculture by Wandile Sihlobo. I am now reading Barack Obama’s latest book, ‘A Promised Land’.”

EXILE
He said before his departure into exile, he volunteered to assist in teaching adult education programmes at St. Barnabas School in the Old Location, while working full-time as a clerk in a law firm.
“Once I set my mind on leaving Namibia, my mission was to go abroad to acquire academic qualifications while working in support of the cause for the freedom of our country. I thought I would return within about five years. However, my political work and later academic studies, and the intransigence of the occupying South African regime meant that I was in exile for 27 years.”

ARRIVING HOME
Katjavivi said after a long and exhausting day of doing civic duties, all he wants to see is his grandchildren.

“All I want to see is my grandchildren running to welcome me back home with a big hug and a smile, and an offer of a cup of tea from my dear wife, although I may opt for a glass of red wine instead, depending on the time of day.”
He said distressing is not an issue. “The secret lies in my name, Katjavivi, meaning, ‘Putting matters diplomatically’. Besides, my experience as a service diplomat has taught me over the years to approach matters with utmost patience and tact. Over and above this, my loving wife, children and grandchildren take away the stress of a given day.”

THE KATJAVIVI MANTRA
“Identify the area of your particular focus and ensure that your research brings forth originality and value. It is also important for one to lead a life that appreciates other human beings, nature, as well as the environment in which we find ourselves.”
- psiririka@nepc.com.na