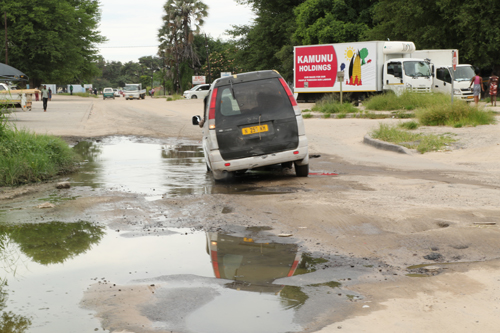 KATIMA MULILO – The CEO of Katima Mulilo Town Council, Raphael Liswaniso, says the bad roads at the town are a result of not having quality gravel in the region.

As such the poor quality muddy gravel used to surface the roads is easily washed away during the rainy season.
Liswaniso made these remarks during a meeting of regional and local authority councillors at Katima Mulilo on Monday.
Residents of Katima Mulilo have continuously criticised the town council for failing to maintain the roads, which are normally in a sorry state particularly during the rainy season.

Liswaniso, however, said that roads will be fixed after the rainy season and that discussions are under way to consider getting gravel from a quarry in neighbouring Zambia.

“With our relationship with Sesheke which we have an agreement with, it will be easier for us to be getting gravel from that quarry which is of good quality. In the Liselo area there is no longer gravel of good quality. As you can see, we tried to put gravel in New NHE and trucks were getting stuck because of the quality of the gravel which we have,” explained Liswaniso.

The CEO further said he took pride in the construction of two main streets in Choto location, which were tarred and are near completion.
He also highlighted the construction of the Katima Mulilo-Mafuta road, which is also being upgraded from gravel to bitumen standard.