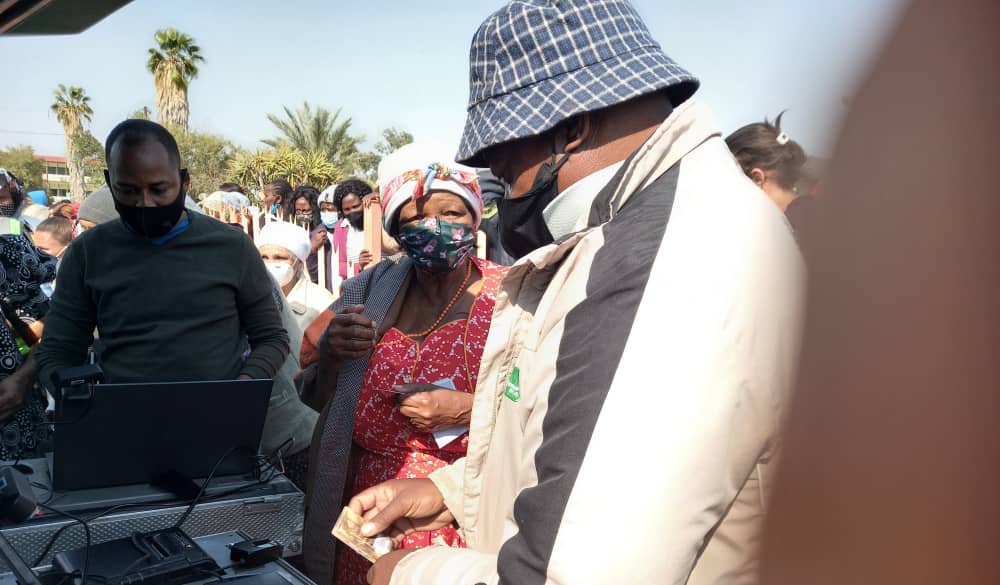 KEETMANSHOOP – Pension grant recipients were greeted by chaos when they turned up at Keetmanshoop’s NamPost office last week.

They were allegedly forced into a small confined space outside the post office as a result of the Ministry of Gender Equality, Poverty Eradication and Social Welfare (MGEPESW)’s poorly communicated decision to make use of Epupa Investment Holdings to take over cash payments from NamPost.

Tempers flared when New Era visited the scene, and four old women fainted due to claustrophia as they were pushed around by other beneficiaries trying to circumvent the line.

Keetmanshoop Urban constituency councillor Joseph Isaacks was adamant that this arrangement was never communicated to his office.

“You cannot blame my office as this was a decision taken by government, and my office was not informed,’’ he explained.

Isaacks raised the fear of possible Covid-19 spreading as these vulnerable senior citizens were cramped together and could not maintain social distancing, whilst some of the other beneficiaries did not even wear the mandatory facemasks.

“Must we really allow our people to be pushed around and faint, one after the other? This is not good at all,’’ stressed the politician.

Asked for comment, Erick Keja from Epupa Investment Holdings said they were contracted by the line ministry to take over the issuance of cash payments in all towns in the //Kharas region and the country at large.

“We will be here to assist pensioners until 17h00 as we will be continuing payments tomorrow in Aroab,’’ he stated. Asked what would happen if not all beneficiaries got assistance, he did not respond.

“We were only informed two days ago through radio services about this new arrangement, and what I suspect is that people from other towns may also have turned up here, which brought about this chaotic situation,’’ he said. Muzorongondo thus pleaded with the authorities to first do proper planning before implementing such decisions.

NamPost spokesperson Wilson Shikoto said the company is only processing payments from the line ministry for those pensioners who opted to get paid through the NamPost Smartcard system.

‘’For those who opted to get cash, the ministry has made arrangements through a different party,” he added.

When approached for comment, MGEPESW public relations officer Lukas Haufiku said the ministry has contracted two companies, namely NamPost and Epupa Investment Holdings, to do pension payments on their behalf.

“When eligible beneficiaries are applying for social grants at the ministry, they are given the option of getting paid cash or through the NamPost Smartcard system,’’ he explained.

Haufiku added that Epupa used to serve those remote areas and towns where NamPost does not have facilities in place for cash payments.

“Since NamPost has ceased cash payments from this month, Epupa are now doing it for the whole country, hence their presence for the first time in the //Kharas region,’’ he noted.

He reiterated that this will be the new arrangement, going forward, to serve those getting paid their social grants in cash.