Home / Eagles sharpen claws for Pakistan clash…looking to bounce back

Eagles sharpen claws for Pakistan clash…looking to bounce back 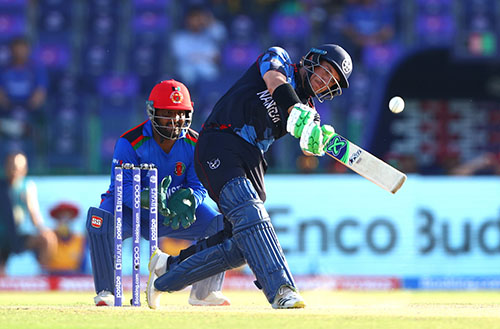 Namibia’s senior cricket side, the Eagles, gaffer Pierre de Bruyn says Sunday’s 62-run defeat against Afghanistan during their Super 12 match of the ongoing ICC Men’s T20 World Cup provided plenty of lessons and going into today’s encounter against group leaders Pakistan, they will be ready to roll with the punches.

“We are definitely looking forward to them [Pakistan]. We’re fully aware that it’s going to now get really tough. We just don’t want to be a team that’s just going to rock up and provide middle practice.

We want to continue competing and we need to sharpen up our skills and believe in our abilities. Today (Sunday) was maybe an icebreaker for us as a team - experiencing this level of intensity. So, we haven’t got a long turnaround - one day of rest and training and then we’ve got to come and face the heat,” de Bruyn told www.espncricinfo.com. After notching up three successive wins against Netherlands, Ireland and Scotland in the preliminary round, Namibia’s Eagles couldn’t quite keep up with Afghanistan’s intensity on Sunday, losing by 62 runs.

It is only going to get tougher for the Namibians when they square off against group-toppers Pakistan today at the Sheikh Zayed Stadium in Abu Dhabi, followed by India on Friday and then New Zealand next week Monday, 8 November.

On Sunday, Namibia lost three wickets in the powerplay and the damage proved irreparable despite the injury-enforced absence of Mujeeb Ur Rahman in Afghanistan’s attack. Namibia’s top three - Craig Williams, Michael van Lingen and Nicol Loftie-Eaton - all fell swinging across the line, leaving de Bruyn to rue their shot selection.

“Yeah, it was always going to be difficult. You’re [up] against top players. We had a plan on how to approach that powerplay - it was all about no damage. The moment you lose four wickets in a powerplay, you’re behind and if you look at our dismissals, every batter will go and say that they got themselves out. [There were] one or two good yorkers on the day that the batter can say ‘that was a good ball’.

But we know we’ve been here long enough to know that on these wickets you’ve got to play straight and we’ve learnt some dear lessons,” de Bruyn added.

Loftie-Eaton, though, had a good outing with the ball earlier in the afternoon. He got some balls to turn big and others to skid off the pitch, keeping the Afghanistan batters guessing.

“I’m so pleased for him and that’s a huge positive for us. He’s a confident player, he’s a youngster, so that’s a very big positive for the bowling unit itself. I thought we executed good plans today. The moment we didn’t execute we were punished and I suppose those are good lessons.”