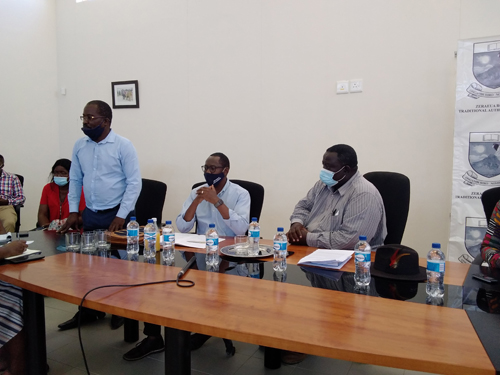 The communities in the Daures constituency in Erongo region say they are still facing challenges to access potable water amid the Covid-19 pandemic.
This was the focal discussion during a two-day tour by Erongo governor Neville Andre and his delegation consisting of officials from the Erongo Regional Council, as well as affected communities.

Residents of Uis, Omatjete, Nus, Okombahe, Otjimbingwe and Usakos met the government officials, where they highlighted their plight, including the acute shortage of water.

Traditional authorities representing the communities pointed to the failure of the local government for not properly consulting the affected communities before installing boreholes in areas that do not have underground water.
In addition, the slow-paced response to the repairing or rehabilitation of broken or malfunctioning boreholes has also contributed to the frustrations of the community.

The community leaders have also pointed to the local government’s failure to engage them when creating plans to dig for boreholes in areas that are not familiar to local government.
In Uis, the locals have to spend up to N$200 to transport water to their households.

They have said the NamWater trucks are often reported broken and unable to reach the areas that are in dire need of water.
“Almost every second farm in Uis has a water accessibility challenge. The farm infrastructure is too old to maintain the boreholes. Some of the farm infrastructures was installed a long time ago and is now broken,” Kennedy !Haoseb Daures councillor said.

“These farmers have been waiting for up to four years to have these machines repaired, which costs about N$1 500 to N$2 000. The relationship between these farmers and the rural water supply office is totally broken. Once these people call the office of rural water supply in Karibib, they are told they cannot attend to the situation because of the expired truck licence.”

These remote communities are made up of mostly pensioners and young children; therefore, they are faced with the challenge of travelling between three and 10 kilometres to reach the nearest water point.
In addition, these communities are unable to financially maintain the repairing of broken boreholes, as their income is mostly from government pension.

In Omatjete, the challenges brought by the inaccessibility of water have prevented schools from reopening, as they would not be able to meet the Covid-19 regulations, the governor has learned. In Klein Spitzkopje, located in the Karibib constituency, the community lost all its livestock to the lack of water, and they are only trying to access water for human consumption.

“When we come back for another community meeting, we will come back with some solutions or at least some answers on these issues of water. Many times, when we go and search for water points on where to drill, we just go there and do it without consulting the community members. Let us consult the community members because they might have better information,” the governor told the Usakos community.
The governor added the community members also need to help the authorities in terms of looking after the facilities that have been installed.
“Of course, some people are vandalising those machines and equipment because they want more water, but let us share and look after the facilities that have been put there by the government so that we can gradually grow and try to address the bigger population of our areas,” he said.