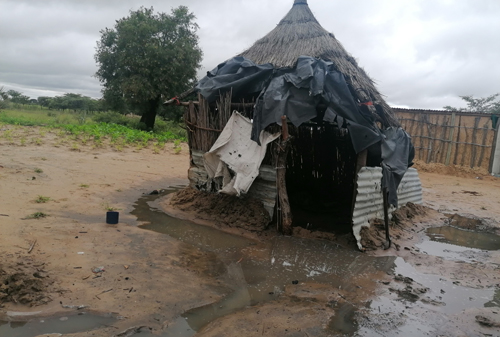 The residents of Sikondo village in the Kapako constituency of Kavango West were left devasted after the heavy rains left them stranded.
Households have been left in dire need of urgent help, as rooms in the homesteads collapsed.

One of the victims, Toini Siremu, said she does not have an objection to be relocated, as she has no choice, considering the predicament they find themselves in. She is, however, concerned over what will happen to her mahangu field.
“Now, we don’t know where to go because my field was already ploughed – and that is where we were supposed to settle. Now, I don’t know where to go,” she stated.

Siremu also raised concern about the school learners, as she does not know what will happen to them if they were also to be relocated.
She said her only plea at the moment is a place to settle, as the rain keeps falling.

Another victim Paulina Ihemba said her household has not eaten, as the fireplace is filled with water.
She further stated that they have been sleeping in water and forced to hang their wet blankets in the room, as it has been raining outside. The children were also forced to go to school with wet uniforms, as they had no other choice.

Headman of Sikondo village Alfons Kavera said it is difficult for people to permanently abandon their homes; therefore, request the victims be moved temporarily and be allowed to return to their homes later.
Regional council spokesperson Salomo Tenga indicated the best solution at the moment is to relocate the victims and that places have already been identified.

It is, however, a challenge to carry out this task, as there is currently nothing at the identified places. They stated the plan is to source funds and the process has already started.

“And also, we are trying at the regional level to source for support. Basically, what we need is tents; the food, as you can see, the people haven’t really been eating and the discomfort because of the water in their houses,” Tenga added.
He also emphasised that this situation does not override Covid-19 and people cannot all be dumped at one place because they are flooded, as it will be an act of negligence.