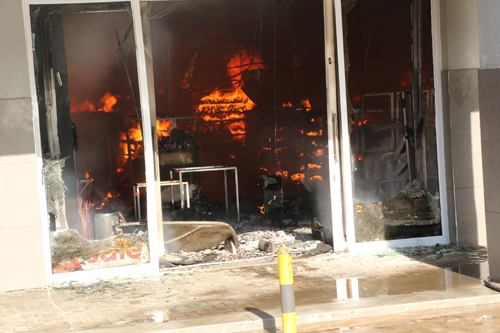 KATIMA MULILO – The jobs of about 400 workers went up in smoke after a huge fire razed the Katima Mulilo Shoprite shopping complex yesterday morning, destroying property worth millions.

At least six outlets, including Shoprite, Pep Store, Clicks and Hungry Lion were destroyed in the fire. It is suspected that the fire started in the morning around 04h00 and although the town council’s fire brigade was quick to respond to the incident, they could not extinguish the fire as their truck was itself nearly engulfed in flames after allegedly being hit by flying objects from the burning property.

Town CEO Raphael Liswaniso, who was one of the first people to arrive on the scene, said the fire started inside Shoprite, before it extended to other outlets. Liswaniso suspects a short circuit may have caused the fire.

The town in fact experienced a power outage around 03h00, which was restored moments before 04h00.

Liswaniso added that the fire was so huge and their small truck could not do anything to prevent the fire from spreading.  He admitted that their fire brigade department was not prepared for such a huge fire, as they do not have adequate equipment.

Firefighters from Mpacha Airport and the forestry department were roped in to help put out the fire. However, despite the reinforcement, the fire spiralled out of control and nothing could be saved.

The shortage of water at the town also worsened the situation, as firefighters were forced to fetch water from the Zambezi river.

“When we went to NamWater we found that there was no water in the reservoir. Only to learn that they have a pipe burst at the waterfront. So, the level of the reservoir was very low and we couldn’t pump water at the time. We had to talk to NamWater, and they had to start another smaller pump at the river to fill the reservoir to start pumping,” the CEO said.

Katima Mulilo mayor Lister Shamalaza described the incident as a great loss for the town. “We are very sorry this morning that all the buildings that were at this Shoprite complex where our people were employed have now burnt down. This was their livelihood where they used to get money at the end of the month to assist their families,” he said.  One of the owners of the Shoprite complex from Coimbra group declined to comment. “I have no comment, I don’t know what to say. The solar system alone is valued at N$4 million,” he said briefly.

Zambezi region crime investigations coordinator Deputy Commissioner Evans Simasiku said the cause of the fire was not yet established.

“Investigations will still continue. We are going to open a case of arson, which will involve a forensic investigation. We want to establish what really caused the fire. Where did the fire start? Was it from outside or from inside? But what I would like to say is, if this satanic work which was done here, was done by a human being purposely, if found will be brought to book,” said Simasiku.