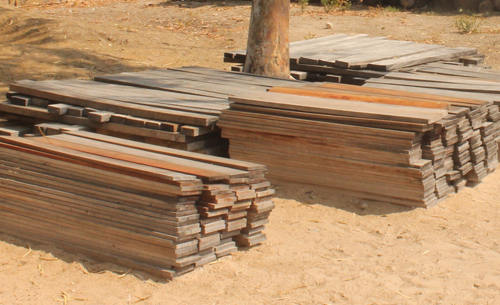 RUNDU – The police in Kavango West have arrested four Namibian male for violating the curfew under the current Covid-19 regulations and for transporting timber planks illegally at Naingopo village, some 30km south of Ncaute police station.
They were arrested in the wee hours of Saturday morning just after midnight.

“Our officers were on patrol in the area and they came across their vehicle – and they were violating the curfew, as everyone is expected to be at home that time,” said Deputy Commissioner Abner Agas, the new regional crime investigation coordinator for Kavango West.
“People should seriously adhere to the curfew,” Agas warned.

He said the police tried to stop the suspects who were travelling in a white Toyota Land Cruiser with a trailer but they proceeded to drive, which prompted the officers to fire warning shots.

He said after disregarding the warning shots, the police was forced to shoot at the car tyre in order for them to stop – and when the officers inspected the trailer, it was discovered they were transporting unprocessed timber planks.
“They did not present any permits allowing them to transport the timber planks. So, they will be charged for violating the curfew under the current Covid-19 regulations, the transportation of this timber planks without a permit and also failing to stop when they were requested by police officers to stop,” Agas said.

The male suspects, aged between 30 and 48, refused to tell the police where they got the planks from. However, the police investigation revealed that the timber was allegedly stolen and the vehicle that belongs to a Chinese national was also allegedly used without the owners’ consent.

“The driver works for a Chinese man in Rundu and the vehicle belongs to that Chinese. The owner was not aware of his vehicle being used to illegally transport timber. The planks belong to another Chinese male, who was also not aware that his timbers were being stolen,” Deputy Commissioner Agas said.

According to Deputy Commissioner Agas, the suspects claimed that one of them discovered the timber at Naingopo and decided to organise a vehicle and friends to go and steal them.
“The owner of the planks is yet to open a case of theft against the suspects and the vehicle owner will also probably open a case for using a motor vehicle without the owner’s consent against the driver,” Deputy Commissioner Agas noted.