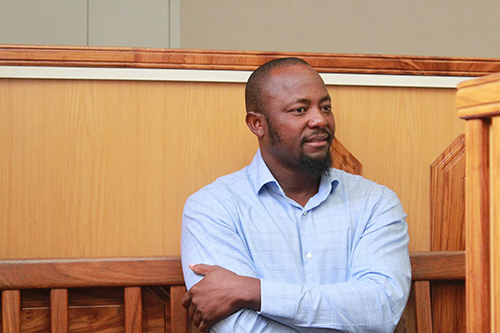 Former National Fishing Corporation of Namibia (Fishcor) CEO Mike Nghipunya’s constitutionality challenge against parts of the Criminal Procedure Act (CPA), will be heard by a full bench of the High Court.

Judge Thomas Masuku yesterday indicated Judge President Petrus Damaseb has decided the matter to be heard before three judges of the High Court.

“This matter is of outmost importance. It deals with constitutionality and the orders sought have far reaching consequences. So, it is befitting that it is heard by a full bench,” explained Masuku.

The court postponed the case to 3 November for the judges to find a suitable hearing date. Nghipunya filed an urgent application in August asking the court to review and set aside section 61 in the CPA which gives the court authority to refuse bail to accused persons on grounds of “administration of justice or public interest”.

He also wants the court to review and set aside the section in the CPA containing those words, declaring it unconstitutional, null and void – and of no force of law and effect.

He further said the words exceed the limits of a constitutionally compliant law, and it is overly broad and capable of full comprehension by those likely to be affected by it.

Nghipunya who again wants to apply for bail in November in the High Court, wants the court to consider his application without the said parts of the section.

The State through their lawyer Slysken Makando intends on opposing the application.

The prosecution is alleging that Nghipunya, alongside Esau, Shanghala and James, used their offices or positions in a public body to obtain gratification and gain N$75.6 million that was paid to them or entities of their choice between August 2014 and December 2019.

He has since denied the allegations. Nghipunya is represented by Thabang Phatela, instructed by Milton Engelbrecht.