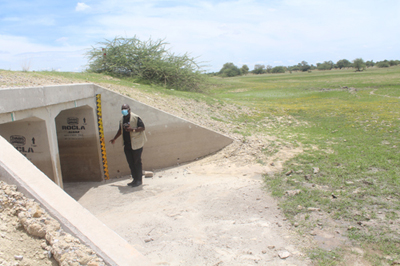 OSHANA SHA NALUMONO – Northern-based senior hydrologist Leonard Hango yesterday maintained there were no signs of the seasonal floods from Angola, locally known as efundja, yet.
Hango, who is also the Oshakati mayor, said the stream, known as Oshana sha Nalumono, which carries floodwater from Angola to Oshakati, is still dry.

According to Hango, the flowing water seen at Oshakati is collection of water from good rains in the areas of Endola and Ongenga, which also ended up in the ephemeral Okatana River.
The water flow, which was observed at Okatana just outside Oshakati, has subsided from 0.4 mm on Tuesday to 0.34 mm yesterday. “There is no flood from Angola. The water observed at Okatana is not floodwater from Angola but a collection of water from heavy downpours in the vicinity of Ongenga and Endola constituencies. This is the water that collectively came together and flowed in one stream,” said Hango.
At Endola, the water levels had also dropped from 0.75 mm on Tuesday to 0.65 mm yesterday.

Hango said there is no record of floodwaters from Angola observed thus far. He said southern Angola did not receive significant rain at this stage to trigger a potential efundja that can remarkably flow into northern Namibia.
“They are still waiting to receive rain as is the case in some parts of Namibia, which has not received sufficient rainfall,” Hango said.
He stressed the country is still at the beginning of the rainy season and the nation will be informed accordingly when the situation changes.
“The moment our sensors at the borders pick up flood inflow, we will inform the people accordingly, especially those who are usually flooded, to prepare themselves to relocate to higher land to avoid infrastructural damage,” said Hango.
The forecast predicted this year is that the country will receive normal to above-normal rainfall.

He said if the prediction is right, it is expected that access to various localities will be cut off as a result of flood.  So far, the average rainfall received at Oshakati is 33 mm.

He called on the public not to panic, saying with the construction of the embankment at Oshakati, floods at the town will no longer be an issue.
“With the construction of the dyke, there will be no longer flood water in the town,” said Hango.
He said floods were particularly observed in new receptions such as Ehenye.
Hango said the only flooding at Oshakati will be stormwater.

However, he said, the council is working around the clock to put up stormwater channels to ease flooding within the town.
- nashipala@nepc.com.na

The Farmers’ Kraal by Charles Tjatindi - Is farming really the real deal?

Govt toughen up on illegal fencing