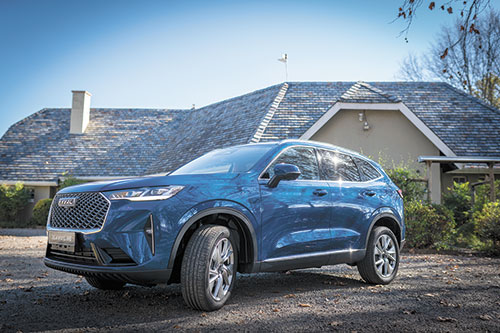 The eagerly anticipated 3rd Gen HAVAL H6, which is scheduled to be launched in Namibia towards the end of this month, features a leading high-level intelligent driving experience with five-dimensional upgrades in the areas of design, intelligence, power, safety, and comfort.

In China, the new H6 gained instant popularity since its launch, selling over 20 000 units in less than a month. Among the early owners, lady drivers praised the rich intelligent driving assistance, which is close to Level L3 autonomous driving, while the men simply adored the intelligent connectivity like FOTA upgrade tech, and the unexpected performance of the engine, transmission and chassis system.

The H6 offers a five year or 100 000km warranty as well as a five year 60 000km service plan, both of which are included in the retail price.

A lot has been said about HAVAL’s new L.E.M.O.N platform of late, JOLION which launched in April and was the first product to feature this new technological leap. In layman’s terms, the new platform allows more strength at a lower weight. As you may know being light weight is of great significance to the automobile industry mostly due to increased performance and improved economy. The LEMON platform can form up to 438 basic modules and 113 standard modules and has completed road testing of over 6 million kilometres including 76 different kinds of road surface found globally.

The vehicle boasts three new standards that were set out from the start, the first being an Intelligent SUV with the world’s leading safety, the creation of a comfortable riding space for driver and passenger and lastly an efficient technical standard ensuring supreme efficiency on all levels. Designers strived for three best in class features namely, best in class application of 2000MPa thermoformed steel, to be the only SUV that can activate autonomous Emergency Braking in all driving scenarios and best in class SUV with super-sensitive and cutting-edge intelligent cockpit.

The all new HAVAL H6 has a purposeful design aesthetic with the goal to be unapologetically futuristic with a “sci-fi-esc” design intention ushering in a new generation of design. Everything from the front bumper and mesh grille flows stylistically into an uninterrupted Phil Simmons design that embraces the futuristic mindset from the outset. The streamlined waistline mimics an archer’s bow string, poised and ready to fire. The LED Lighting is striking and effective to say the least and together with the 19-inch alloy wheels makes for a fast pose even when standing still. Inside, the design aesthetic is maintained through an Oriental styled intelligent cockpit with a virtual dashboard without a heads-up display (other than on Super Lux version which does have the heads-up display).

H6 also boasts new generation technologies: All models come fitted with Full-Speed-Range Adaptive Cruise Control and boasts to be the only SUV in its class that can activate AEB in all driving scenarios, including passing pedestrians, bicycles and traffic intersections. This intelligent SUV features TSR (Traffic Sign Recognition) assisting the driver to further abide by the rules of the road and ensure passengers’ safety.