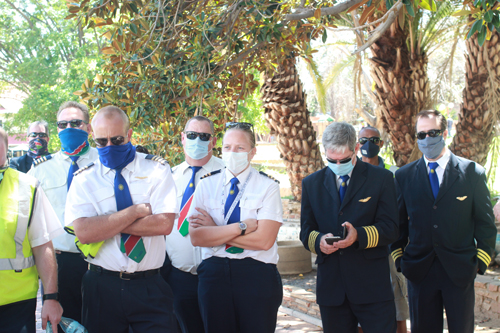 After a massive nationwide demonstration last week against the voluntary liquidation of Air Namibia, a group of pilots from the Namibia Airline Pilots Association (Napa) bemoaned the decision to close down the national flag carrier, saying they feel let down by the country’s leaders.
According to Napa president, Heino Jakob, Namibia has done exceptionally well in fulfilling the vision of former leaders by training Namibian pilots and engineers.

“We are so proud to be the ambassadors of Namibia and being able to carry our flag to other countries. Unfortunately, with the voluntary liquidation of Air Namibia all these years of building a legacy for our country is now wasted,” said Jakob.
He continued that a lifetime of hard work, commitment, and dedication was wiped away, leaving him with a sense of loss, disappointment, and discouragement in the leaders who were supposed to guide the country and airline towards a better tomorrow.

“Sleepless nights have been haunting me due to the worry of house and car payments as well as other commitments such as healthcare. We will be forced to look for other opportunities outside Namibia taking our skills and resources with us, leaving Namibia again with very few qualified Namibian pilots and engineers in the field of aviation,” he noted.

Another pilot, Tinus Blaauw, who has been in aviation for more than 20 years, and had been employed by Air Namibia for close to 16 years, also shared his frustration.

“Liquidation is one of the most traumatic events in your aviation career that you can experience, especially with the Covid-19 pandemic. Aviation growth has been stunned with an approximately 60% decrease in passenger numbers. There is almost no employment worldwide,” said Blaauw.

According to Blaauw, liquidation will mean a complete restart in a completely new field for thousands of fellow Namibians, who are jobless now due to direct or indirect effects of the liquidation.
“It will mean no money or enough money to even pay basics like your bond repayments, groceries, water, etc. We can only hope that the powers that be, will look back and realise the tremendous mistake that has been made,” he outlined.

Lî Rossouw feels liquidation is a cop-out; “It is an easy and convenient way to overlook and pardon endless years of mismanagement and lack of willingness to engage expertise. It is turning a blind eye to the imposing secondary economic effects, and a total disregard of accountability.”
Moreover, Rossouw said the decision will deny future generations the pride of having a national carrier, the grandeur of being part of an ever-evolving industry, and the opportunity to realise their dreams in aviation.

“This will be robbing Air Namibia, and Namibia as a whole, not only of a 74-year long legacy but also of a future as a worthy competitor and an imperative additive to our tourism sector and economy,” noted Rossouw.

Meanwhile, Graham Hopwood, executive director at the Institute for Public Policy Research (IPPR), Monday on an NBC talk show said Air Namibia’s poor performance was attributed to the national airline›s boards and management getting used to bailouts from the government.
Hopwood added that the pandemic and 2016 recession made it worse for the domestic economy, which forced the voluntary liquidation of Air Namibia that will affect numerous livelihoods, but said the decision was inevitable.

He added that a lack of transparency at Air Namibia led to no accountability. “With a lack of transparency from the airline, there is a correlation for other management issues going wrong.”
Hopwood concluded that the liquidation is an emotional and psychological blow for older employees, noting they would find it difficult to reenter the job market.
-mndjavera@nepc.com.na