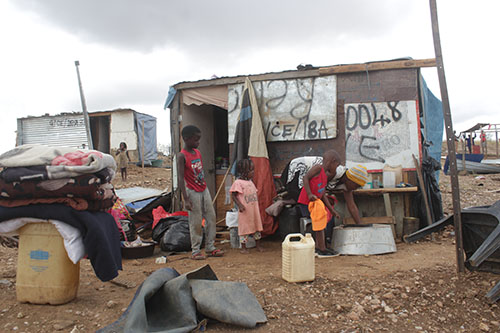 For six years, a large piece of land in one of Windhoek’s ever-growing informal settlements served as a beacon of hope for those who made John Mutorwa, Hadino Hishongwa, Thlabanelo and all other Goreangab Dam sections their home.

The community wanted a school to be built on the plot that they have guarded and prevented others from putting up structures in.

That hope all but vanished when the City of Windhoek relocated 46 families from there on 28 December 2021 to the mountainous area behind Goreangab Dam, which the locals call Hadino Hishongwa.

The community on 17 December 2021 wrote a letter to the minister of education titled: ‘Demanding for a primary school in the informal settlement, Goreangab Dam, Samora Machel constituency’, signed by Sem David, one of the community leaders.

“There is a high need for a school in the informal settlement area of Goreangab Dam. We see the increasing number of children travelling long distances. They have to walk in darkness, which is worrisome and involves the high risk of car accidents, human trafficking and rapes. Many parents are unable to pay for their kids’ transport to school,” read the letter.

David said in 2016, the community discovered the piece of land and guarded it so that a school could be built there. They have now thus asked the ministry to include it in the budget for 2022.

“We wrote a letter to the City of Windhoek, demanding for this land to be reserved for public services. Our proposal letter is still with the City, received by councillor F Kahungu and witnessed by Mr [Faniel] Maanda, and we have discussed the need with them. We have also discussed the matter with current regional councillor Nestor Kalola, who supported the initiative,” he added.

However, the municipality’s spokesperson Harold Akwenye said the relocation of the 46 families is temporary, and their research showed that a school is indeed needed in that area. “Our town planners will advise on the suitable area/land for a school,” he observed.

Asked if the City consulted with those already living in the area, he responded that “the piece of land in question belongs to the City of Windhoek. It is the onus of the City to place the affected families on the piece of land to make sure they are cared for. We can only inform the residents within that area that we will allocate affected people on the land. We don’t have to ask permission for our own land.”

“The nearest toilet (communal) is 100m from the site. The residents are allowed to put up their toilets using the same line. The City is planning to bring the water point closer to the people, while a high mask light is in the pipeline and will be installed soon”, Akwenye continued.

The 46 families who were relocated to the piece of land were land grabbers who were squatting at the soccer field at Tobias Hainyeko for four months last year. They’re trying to carve out a home in the uninhabitable hills and slopes in an area the locals had other plans for.

While the women shake out the blankets and other household items to dry them, drenched by the previous night’s downpour, the men try to clear their newly obtained plots as the children play and scream in excitement, oblivious to their parents’ cries.

Dolly Tjiharuka, who lives here, narrates their story: “We were asking for land, so we took land by force. We don’t have work. We didn’t have anywhere to call home. The municipality and the City Police came and tore down our shacks, and confiscated all our corrugated iron sheets and tools.”

She further explained how they asked and pleaded about where they should go, and that’s how they decided to squat at the soccer field. The group was jubilant when they were relocated to plots, which they could temporarily call their own.

Still, a cloud of misery and despair blankets the new plot occupants. They feel they were taken from the frying pan into the fire. The land is unserviced. The nearest source of water is far away. There is no electricity, so the nights are dark.

There isn’t a school in sight.

“The children are just there; not attending school because there isn’t money for transport. Furthermore, it is baboon territory. Baboons are a lot, running away with people’s things, and a seven-year-old boy was even attacked recently in the vicinity. The boy was lifted and thrown to the ground, but he survived,” said Samuel Weulu, a community activist in the Goreangab area.

The newly resettled group say they still have not received their confiscated property.

“We came to struggle again. As I am standing here, I have nothing. I live in a makeshift shelter made of scrap and plastic bags,” said an upset Tjiharuka, adding that she can’t afford new corrugated iron sheets to rebuild. Others who are employed have been able to build more liveable structures.

The municipality allegedly promised the group “water, electricity and toilets, but they didn’t tell us exactly when,” said a community member who didn’t want to be named.

“We fetch water about three kilometres away. The baboons are a menace; you leave, and you find them in your shack”, said Oseckar Ndaamecheme, stating that “Oshili nuutoileta manga i ke, kushi mpa tuuka, (With no toilets, one doesn’t know where to go)”.

Ndaamecheme said he is separated from his family, as he came to get land. “My family isn’t with me, I left them renting in another location because how will one survive here? I had to dig deep into my pocket to rent a place for them”.

“School-going children is another issue. Mine can’t live here now. School is far. How do I afford their taxi fare?” he asked rhetorically.

According to the group, there are 18 children among them, with the majority not having gone back to school since it reopened.

“I don’t know what they were thinking, throwing us back here. Maybe they will bring us houses, a school nearby and a clinic” said Tjiharuka hopefully.

An unemployed young mother of three, Monalisa Nunuhe, was seen sorting her belongings soaked by the rains. She explained that she and her family slept under wet blankets the previous night, and likewise bemoaned the school situation. “I am confused what to do with him. Till here, you pay N$39 [for taxis]. I don’t have a plan because as I am standing here, I don’t have a cent to my name”, she lamented.

With the population growing in the area earmarked for a school, it is a great concern to them that there is still no school.