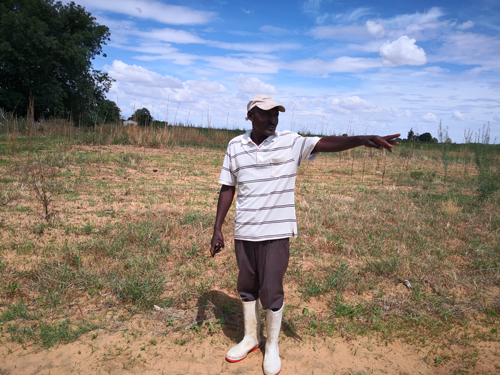 ETUNDA – Vast tracts of land zoned for agricultural use by small-scale farmers at the Etunda irrigation scheme in the Omusati region remain underutilised as producers struggle to make ends meet.

According to Berfine Antindi, the acting managing director of Agribusdev, which is the government entity running the green scheme, the underproduction was as a result of farmers not honouring their revolving loans with Agribank.

The loans offered by Agribank are funded through the ministry of agriculture. As a result of the default in payments, the farmers have no further money to fully utilise their three hectares and therefore only work on a small portion of their crop fields.

“Agribusdev has no role in the money. Ours is to provide services such as ploughing and harvesting, but we don’t give money,” said Antindi in an interview with New Era.

Antindi said only two small-scale farmers have serviced their loans, adding they were doing well thus far.
According to Antindi, some of the unproductive farmers have already been issued with eviction orders, but they are refusing to leave the green scheme.

Speaking on behalf of the farmers, Ferdinand Vakola said he has only worked on half of his three-hectare land, as he does not have the financial means to utilise the entire field.

He said little income has been coming in since 2013, causing a lot of underproduction on his allocated land.
He said many farmers are not able to work on all three hectares, while others have stopped with production completely.
Vakola said with a lack of market, their produce sometimes get rotten and thereby do not make a profit.

He equally charged the money they make yearly is only enough to pay for the revolving loan and their basic services.
“For as long as there is no market, we will continue to farm to put food on the table and not necessarily to become financially independent,” said Vakola. The farmers further claimed it is disheartening that produce from the project continues to be rejected in government institutions such as schools and hospitals. They alleged that those catering in government institutions continue to source for products beyond the red line even for facilities in the Omusati region. Vakola said the only time that their product is considered is when the big farms have run out of produce. “And that is like selling 10 bags which does not make much of a difference.

But how should we feel if our own children are eating from elsewhere whilst we are producing the same food,” said Vakola. The farmers are thus pleading with the ministry of agriculture to look into issues of the market. In 2019, then finance minister Calle Schlettwein issued an economy-wide procurement directive on the reservation of procurement of goods, services and works to local suppliers in terms of Section 73 of the Public Procurement Act. The measure by Schlettwein, who is now heading the agriculture portfolio, directed public entities to source specific categories of goods, services and works produced or manufactured locally and to the extent such goods, services and works are available locally, before procuring these from somewhere else.
nashipala@nepc.com.na