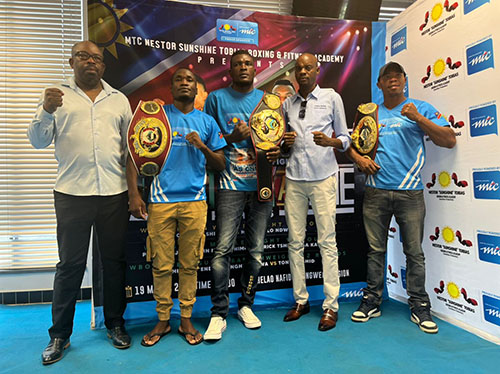 In celebration of the country’s 32nd independence anniversary, the MTC Nestor ‘Sunshine’ Boxing Academy will stage the ‘Together as one part 6’ boxing bonanza at Helao Nafidi, Ohangwena region on 19 March.

The event will be headlined by Philipus ‘Energy’ Nghitumbwa, who will defend his WBO Global super bantamweight title against Tanzania’s Tony Rashid.

Another title fight will be between Paulinus ‘John John’ Ndjolonimus and Erick Tshimanga of DRC for the  WBO Africa super bantamweight, while Charles Shinima will take on South Africa’s Mziwoxolo Ndwayana for the WBO Africa welterweight title.

Promoter and trainer Nestor Tobias said they are looking forward to making more champions in the country.

“We are ready to host; we do this to develop the sport as well as talent,” he said.

Also speaking at the launch yesterday, sponsor MTC’s John Ekongo said they intend to take boxing to the most underrepresented regions across the country.

“We are returning to the Ohangwena region after an absence of four years. The general consensus is we must go to the most underrepresented regions and towns where its necessary to engage communities within those areas, but also bring about sport accessibility to some of those areas, so that it speaks to the social welfare of the economical upliftment but also sport and social development within those regions,” he said.

Ekongo said these clubs have been urged to look further than the Khomas region when hosting events to give opportunities to those in regions beyond Khomas.

He also urged town and other local authorities to engage them with propositions which will be of great importance to them and the boxing stables.