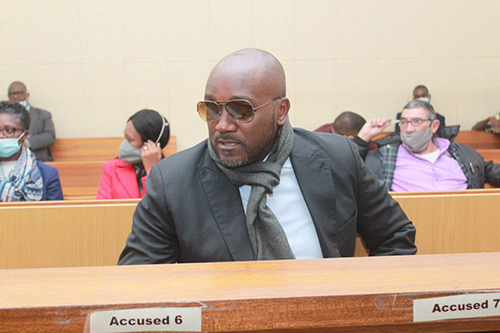 Trevor Brockerhoff, the lawyer of Gustavo, yesterday said the basis of their application is perceived bias against his client following damaging remarks he made in the bail appeal ruling in 2021. According to Brockerhoff, the learned judge, in his own words, stated that the “learned magistrate did not make a finding in so many words that a prima facie case is made out. A reading of the evidence of Mr Cloete, however, establishes a prima facie case against the appellant”.

He said, this surely proves that Miller already read into the evidence on a factual basis, where a learned magistrate did not make such a factual finding as a court of first instance.

According to Brockerhoff, it is established law that a court of appeal is bound by the factual findings of the court of first instance and cannot merely interfere or make alternate findings without any basis.

This, he said, was exactly what Miller did in the bail appeal, which he resided over and clearly shows a predetermination or at least a potential for bias against his client.

He went on to say that Miller continued in the same vein by pronouncing: “More pointedly, the evidence establishes that the appellant purported to be a director of an entity called Namgomar Pesca (Pty) Ltd, and made misrepresentations as to the fact such entity in fact existed, which entitled it to receive fishing quotas. The prima facie case is that these misrepresentations were an important part in the greater scheme allegedly hatched by the appellant and his co-accused”.

“This clearly shows various adverse factual findings; however, this was done where firstly the court was not the court of first instance and secondly where a large portion of evidence have not been heard before this court,” Brockerhoff stated and added this surely is indicative of a pre-determination on the part of Miller.

He further said, when the judge already made out that the State has a prima facie case, where the trial has yet to commence, it clearly shows a pre-determination as well as bias in favour of the State.

Florian Beukes, on behalf of Esau, echoed Brockerhoff’s sentiments and said they are in full agreement with his arguments.  Gustavo and Esau, together with former minister of justice Sacky Shanghala, James Hatuikulipi, Tamson Hatuikulipi, Pius Mwatelulo, Nigel Van Wyk, Otneel Shuudifonya and Phillipus Mwapopi, are charged with corruptly receiving payments of at least N$103.6 million to give a competitive advantage to Icelandic fishing company Samherji in securing access to horse mackerel quotas in Namibia.  They are facing more than 40 counts, including racketeering, contravening the Anti-Corruption Act, conspiracy, corruptly using an office to receive gratification, fraud, theft and money-laundering, as well as defeating or obstructing the course of justice.

Also, on the list of people to be added to the charges is lawyer Marén de Klerk, who is charged as a representative of Celax Investments, which was allegedly used as the conduit to funnel millions of dollars from Fishcor to the bank accounts of the accused.

The State is yet to extradite De Klerk from South Africa and Icelandic nationals Egill Helgi Arnason, Ingvar Juliusson and Helgason Adelsteinn.