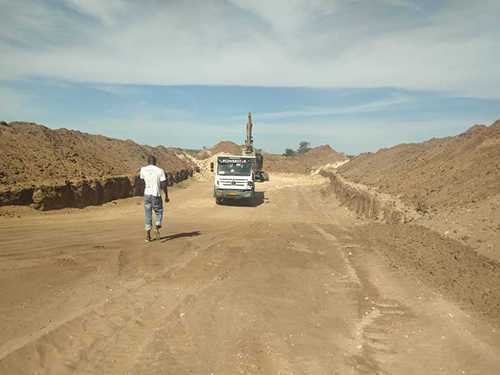 RUNDU – Former Kaisosi suburb committee chairperson Henry Kambonde says the Rundu Town Council should be honest about issues at hand and not blame Kaisosi residents for failing to do their job.

The Rundu Town Council on Wednesday released a statement blaming the Kaisosi community for the town’s disastrous roads, saying contractors appointed by the local authority have been denied access by locals to a borrow pit where they source gravel.

The town’s spokesperson Benjamin Makayi said they are unable to re-gravel some bad roads, nor to upgrade some sandy roads.

Kambonde, who was the former Kaisosi suburb committee chairperson during the time of the borrow pit dispute, said they didn’t stop council from sourcing gravel at Kaisosi; they only demanded that council first upgrades four of their sandy streets to gravel before they continue to mine gravel at Kaisosi, which is on the eastern outskirts of Rundu.

“It’s the council that failed us; we wanted to follow through an agreement where they would first upgrade our roads before taking the gravel all around town, but they failed to come to the party after being in agreement with us,” he said.

“We told the then councillors of the town that before they get gravel from borrow pits in Kaisosi, we demanded that they must first fix the road situation in Kaisosi where we are really behind in regards to the development of roads. We don’t have gravel roads; we only have one street gravelled – all are sandy roads. There is no development here, while gravel that is taken to other parts of town is from Kaisosi,’’ he noted Kambonde told New Era they just want to benefit from their resource.

“On 26 November 2019, while Kandingu was the mayor, we brought the councillors and their technical staff to the site to show them these roads that we wanted to be developed. However, the failure is on their side. As Kaisosi residents, we just want to be developed too. They always get gravel from here but they don’t want to use it here. Why should it be like that?’’ he asked.

Kambonde said council failed to listen to their demands: “All they need to do is honour our demands, and we won’t have a problem. They failed. We have videos of the site meeting we held on 26 November 2019 with the former councillors, and we sorted out our disagreement – but to date, here we are. They are now putting the blame of their poor performance on the community they are supposed to serve,’’ he said.

The community demanded and still demands that their roads be looked into.

“They must not accuse us. We can even go to court. We didn’t deny them access. We just want them to also attend to our demands. We are not charging them; we just want some of these gravel roads to be developed as well,” Kambonde noted.

They should know council is the custodian of the land in question. “We treat all locations the same. Rundu stretches from Kasote to Kaisosi – and when we have resources, projects are distributed fairly. This current project that we are starting now will benefit all areas – for instance, Kaisosi will get gravel roads of a combined 4.1 km,” Makayi noted.

“People must not make individual decisions that will negatively affect their community. Look at these delays now,” he added.

Rundu has been in the media for having some of the worst roads. Residents and visitors have described the roads as terrible.

During a stakeholders site visit of the Roads Authority project underway along the Maria Mwengere Road, works minister John Mutorwa expressed disappointment on the existing state of affairs.

The Maria Mwengere Road stretches about 10 km from Rundu to Uvhungu-Vhungu green scheme and Kayengona village.

“Here, I must be strong because at the end of the day, if the matter is not properly clarified, who’s getting the blame? It’s not me as an individual; it’s not you as an individual – it’s the government. People will say ‘government, we are being neglected here’,” he said.