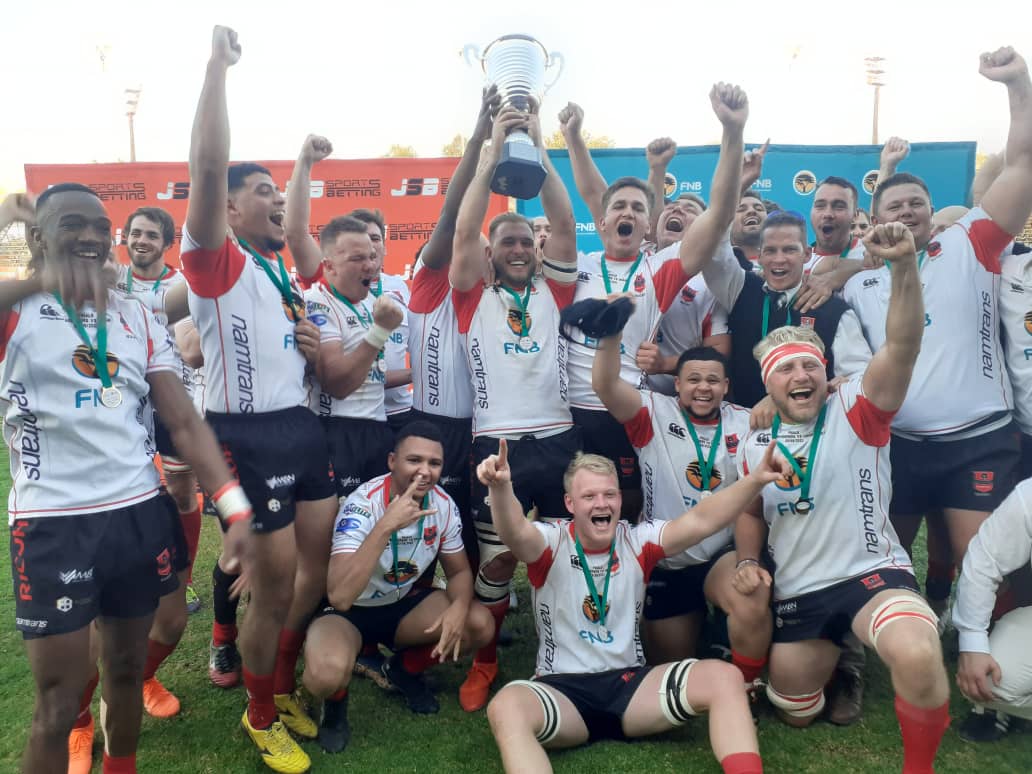 Wanderers on Saturday showed great fortitude to outpoint former champions Unam Rugby Club by 51-31 to lift the 2022 NRU Premier League trophy at the packed Hage Geingob stadium in the capital.

Wanderers meant business from the start as Andre van der Berg scored the first points of the match via a penalty in the third minute. Unam responded via a converted try to take the lead before the two sides traded penalties to leave the score at 10-06 in favour of Unam with 13 minutes gone.

Wanderers then scored two converted tries and a penalty to Unam’s one converted try and one missed penalty to leave the score at 23-17 at halftime. The beginning of the second half saw Unam hit the post twice from penalties within the first five minutes. Wanderers took advantage of the misses to score a breakaway try from their five-metre line through winger Nandivatu Karuuombe with Van der Berg registering his only miss from the kicks to leave his side leading 28-17.

Unam struck back with a converted try to make it a four-point game (28-24) but Wanderers once again stretched their lead through another converted Karuuombe try to get to 35-24. Wanderers then scored three more penalties and a converted try to reach a total of 51-24 with 12 minutes of the match remaining.

Unam could not mount a comeback but managed to reduce the arrears via a converted try by Darryl Wellman with seven minutes remaining for the final score of 51-31.

Van der Berg was the star of the show as he scored 29 points from the boot (seven penalties and four conversions) to lead his side to their first championship in four years.

Wanderers scored five tries (twice by Karuuombe and one each from Louis Meyer, Nico Martens and substitute Iyambo Tsuuya).

Unam’s Aljarreau Zaahl had a nightmare game with his boots as he missed four penalties but converted all four of Unam’s penalties, leaving his side facing their second defeat in the finals in five years.

In a post interview, an excited Kitshoff said it was an important occasion and achievement for the club to be crowned champions again, saying it was not an easy task but his boys understood the assignment and through unity they delivered.

“It’s a big win for us. We had hope and faith from the beginning of the season without knowing what would happen as the league progressed, but finally, we are here celebrating this vital win today as the new league champions,” he said.

“My boys knew what the game plan was from start to the end, I am immensely proud of the team and what they have done. This achievement speaks to the hard work the guys have put in throughout the entire season and all the sacrifices they have made, including long nights and long weekends to get this trophy,” added Kitshoff. In the reserve league finals, Wanderers 2 beat Rehoboth 2 by a narrow 31-30 to claim the title in that division, while in the first division, Sparta 1 edged Ocean Swallows by 30-20. In the women’s league final, Wanderers claimed the title after thrashing Rehoboth 29-0.