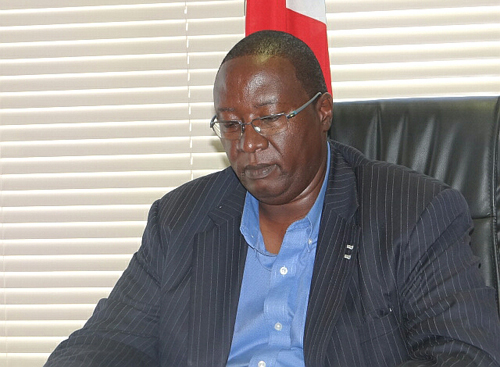 WALVIS BAY - President Hage Geingob has led tributes in honour of former Erongo governor Cleophas Mutjavikua who died on Sunday at the age of 57.

Mutjavikua died in a Grootfontein hospital reportedly from Covid-19 complications.
Geingob extended his condolences to the family of Mutjavikua while lauding his contribution to the socio-economic development of an independent Namibia both as governor and trade unionist.

“I have learned with sadness about the passing of former governor Cleophas Mutjavikua. By mobilizing the trade union movement, Mutjavikua played an important role in the liberation of Namibia from apartheid occupation. His contribution to building an independent Namibia in various capacities, including as governor of the Erongo are noteworthy,” Geingob said. More tributes have been pouring in for Mutjavikua. Unionist Risto Kapenda said Mutjavikua was a national asset, saying he nurtured the late former governor into unionism. “He was indeed an asset but the Presidency didn’t see that. Instead of promoting him, they demoted him,” a sad Kapenda said yesterday during a telephonic interview with New Era.

Kapenda said he was instrumental for Mutjavikua’s election as the third general secretary of the Mineworkers Union of Namibia (MUN) after leaving the Consolidated Diamond Mines (CDM).

He served in that role between 1992 and 1993. “It is indeed during his active participation in labour matters that resulted in him being spotted by former president Hifikepunye Pohamba and appointed as governor of Erongo where he served from 2010 until mid-2020,” Kapenda said.
The current governor of Erongo, Neville Andre also offered his condolences to the Mutjavikua family, describing him as a “true cadre”.
“Comrade Mutjavikua led this mighty region for two terms, and he was indeed a true cadre that disposed of his duties on all fronts. Hence, I wish to extend my condolences to his wife, family and comrades during this very sad and difficult time,” Andre said. PDM president McHenry Venaani, who is recovering from Covid-19, said he was shocked to hear about the passing on of Mutjavikua.

“He has played and led in various roles before and after independence in shaping the modern society we have become. Noting the very fact that I am battling the very devastation of Covid-19, I wish to convey our family’s deepest condolences and bereavement,” Venaani said on social media.

Former unionist and current deputy minister of labour Hafeni Ndemula yesterday also said the was consumed with sadness by the untimely death of Mutjavikua. He then described Mutjavikua as a kind and progressive person who specifically made an impact as a trade unionist.
“His passing left us with a sad void but his legacy of progressive ideas will always guide us like a beacon light. The good that he has done for the region during his tenure as governor will always be appreciated,” Ndemula said.
Meanwhile, family spokesperson Ramana Mutjavikua yesterday told New Era they were still waiting for medical doctors to declare themselves on the exact cause of death.

He told New Era Mutjavikua - although admitted in hospital - was breathing 70% on his own and was in a good spirit.
“I spoke to him on Sunday and he was fine. However, he only complained about chest pains and his health deteriorated in an hours’ time resulting in his death. Hence, they are not clear whether his death was Covid-related,” Ramana said. He also indicated the family has not yet made any funeral arrangements as they are waiting on the doctors. Mutjavikua is survived by his wife Engeltjie and eight children.
– edeklerk@nepc.com.na