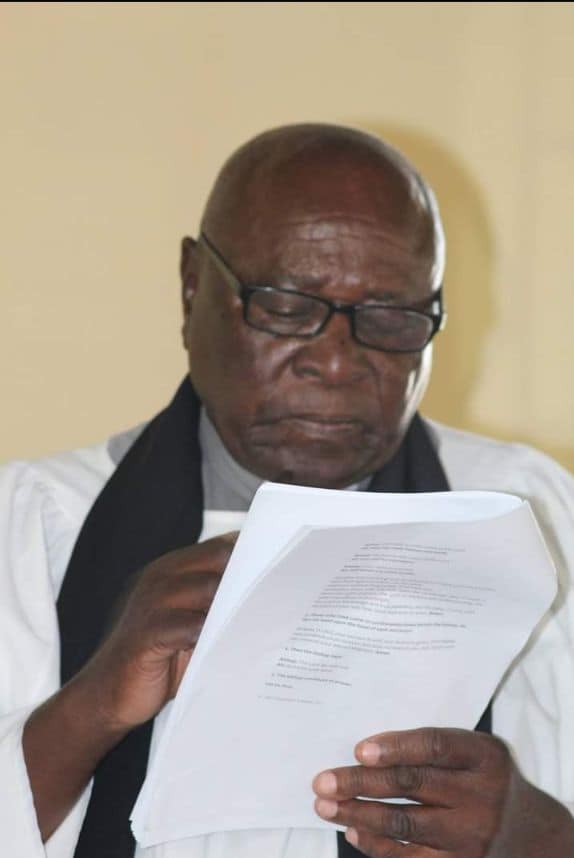 Denys Kamulipakua Nandi, a former inspector of education, political veteran and a man of faith, wore many hats. He died last week at the Rhino Park Hospital in Windhoek at the age of 83.

Nandi was the elder brother of the Deputy Prime Minister, Netumbo Nandi-Ndaitwah.

Being only the second Oshiwambo-speaking person to obtain a degree in education after legendary author, the late Daniel Namuhuja, Nandi invested his knowledge of education in his community and served in several profiles of education that included being a teacher, school principal and an inspector. He was also a member of the Ovamboland Bantustan Homeland Assembly during the apartheid South African regime, where he served alongside other veterans such as the late Katuutire Kaura, Peter Kalangula and Dirk Mudge, amongst others.

As a family man, his daughter Faith Nandi-Sheya described him as a loving father, “one who respected our will, rights and decisions in life. He was a principled man, full of humility. Our gem. He will be forever in our hearts.”

Nandi was likewise a former deacon and a church secretary for the Church of England in Namibia, which is now known as the Reformed Evangelical Anglican Church of Namibia (REACH-NA).

As eulogised by bishop Lukas Katenda of REACH-NA, Nandi leaves behind a rich legacy, not only as a husband and father, but as a unique person in his own right and a national leader, especially in the education sector.

He started his elementary education at St Cuthbert’s Primary School at Onamutai, which was started by his father, and then continued to St Mary’s Senior Primary and High School (an Anglican Church School) at Odibo, where he became a teacher and principal after completing his junior certificate and matric.

“Nandi, with other educationalists of their time such as Namuhuja, were key leaders in the promotion of educational culture in Ovamboland, alongside other education leaders in other homelands within the territory, as it was then organised before independence,” remembered Katenda, adding that despite the challenges him and others endured, they persevered to inspire and enforce the culture of education in Ovamboland.

On the religious front, Nandi became involved in the establishment of the Church of England in Namibia, the Reformed Evangelical Anglican Church of Namibia.

REACH-NA started as a result of the ordeals of 1969 within the Anglican Diocese of Namibia.

He served as the first secretary and interpreter of the church, work which he has done diligently for about 40 years until his retreat in 2017. His successor, Lasarus Hakwaake, was elected the new secretary.

“He has been a delegate to annual general synods of REACH-SA, representing REACH-Namibia. He also translated some materials into Oshikwanyama for usage in the church. These materials included Eitavelo and the Catechism of the Church of England.

After the death of bishop Peter Kalangula in the year 2008, church secretary Nandi was requested to be the chairman of the executive committee of REACH-Namibia, work he executed with humility and diligence for nine years until a new movement was mooted in 2017, taking effect in 2018, when the young folk converted to and joined REACH-Namibia,” Katenda said.

He is also remembered as a believer in education as a key to the future for young people.

“He was humble and full of wisdom. He was reserved in many ways, and spoke only when it was necessary. He was trustworthy, and indeed had a special love for children and young people. He was also a farmer,” said Katenda in the obituary.

Nandi’s burial, which will take place on Saturday, 2 October 2022 at the Onamutai cemetery of the Ongwediva constituency, will be preceded by his memorial service that will take place at the Christ-REACH Church in Ondangwa.

He is survived by six children and his siblings.