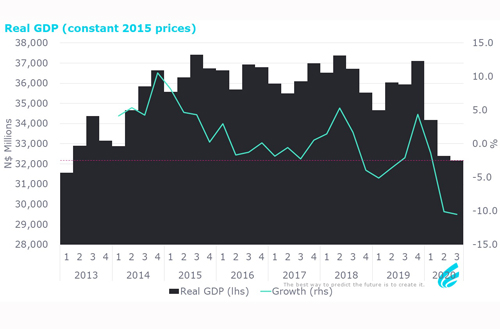 Total value added in real terms nationally reached the lowest point in quarter three (Q3) of 2020 since Q1 of 2013. This was confirmed by the latest figures from the Namibia Statistics Agency (NSA).
Based on revised changes, the NSA report stated that real gross domestic product (GDP) growth for Q2 of 2020 posted a contraction of 10.1% compared to an initially reported decline of 11.1%.

Major revisions were observed in agriculture with 10.6 percentage points, construction with -8.0 percentage points, and information and communications with 5.6 percentage points.
According to Robert McGregor, a local economist, the decline in value addition in Namibia shows the extent to which the economy has regressed. He said the expected growth will mostly be the base effect, and even if strong growth is experienced, it will be below output levels seen in 2018 and 2019.

McGregor continued that the effects of the lockdowns will still continue to haunt the domestic economy: “First supply shock (lockdowns) followed by demand shock. Firms impacted by supply shock cannot supply because of lockdowns, and regulations. Moreover, because they do not generate revenue so they have to cut costs and often embark on salary cuts and retrenchments. Reduced income for people means less spending, so demand goes down.”

Also, Lameck Odada, an economics lecturer at the Namibia University of Science and Technology (Nust), said the low-value addition was largely expected even though the real extend of the Covid-19 pandemic effect has not yet been determined. Odada feels 2021 will still be a tough year given the second wave of the pandemic.

Another local economist, Klaus Schade, stressed that the decline in the quarterly GDP was expected mainly due to three factors, namely; a significant drop in diamond production; continuous decline in manufacturing activities (including a drop in livestock marketed); and in particular the closure of borders to foreign tourists during the peak season. This last factor not only affects the hotels and restaurants category but also business services (car rentals, tour guides, tour operators) and other tourism-related economic activities.

“What is encouraging is the positive growth in construction although it is coming back from a very low base. Because of the overall low base of economic activities in 2020, we should see a strong recovery in 2021 unless further lockdowns are imposed,” Schade elaborated.
According to the Bank of Namibia’s Q3 bulletin, global economic activity rebounded strongly in Q3 of 2020 compared to the previous quarter.
Even though the drivers of the rebound varied across the major economies, generally, it was attributed to the removal of pandemic-related restrictions. The report stated that the recovery in the US and Europe originated mainly from household spending on the back of government transfers and eased lockdown measures.

“Retail sales have recouped to pre-pandemic levels, however, investment remained weak. China’s story was different from all economies globally, as the GDP growth rate was positive during the second and third quarters of 2020, which was mainly ascribed to infrastructure spending from central government expenditures,” the central bank stated.
- mndjavera@nepc.com.na