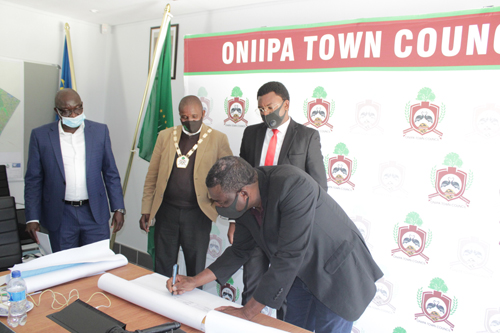 ONIIPA – Oniipa Town Council officials have been cautioned against focusing on personalities when appraising employees instead on the actual work done.

Mayor David Kambonde said it was dangerous to attach emotions when appraising workers as doing such would see some get victimised.

“I have observed that such events are turned into courtrooms instead of an appraisal process. Personal vendettas should not be tolerated. Rate each individual fairly,” he said during the signing of performance agreements by the council’s top officials this week.

In addition, Kambonde said it was vital to have a performance system, emphasising that an organisation without competent measures in place does not produce desired results.

“The system is meant to drive performance and behaviour among employees. This determines the overall performance of the council. It also helps to enhance input and output, which instils a sense of accountability,” said consultant Daniel Ndaningina.

According to Ndaningina an employee scoring three points deserves 10% reward of their basic salary, while the best gets 25%.

Oniipa Town Council CEO Junias Jacob said it was a collective task for the team to deliver development as it is their sole responsibility.

“There are key performance indicators included to deal with the electrification of informal sectors as well as addressing roads and provision of affordable housing. I will therefore continue implementing all these strategic plans,” said Jacob, adding the time to work is now as there is no best moment for one to begin.