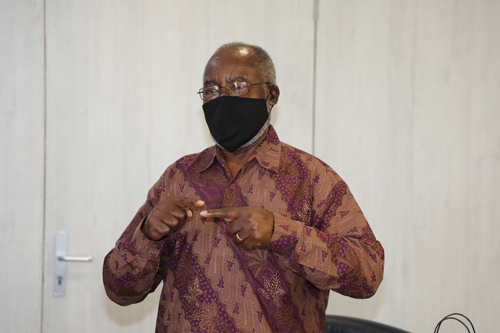 The international relations ministry on Friday bade farewell to special advisor on foreign affairs and renowned diplomat Tuliameni Kalomoh, who retired from that role.

Kalomoh was appointed special advisor to the ministry in 2008, an assignment he successfully carried out until Friday.

“You always got the job done perfectly and without any delay. Indeed, you are a mentor and an inspiration to many,” Nandi-Ndaitwah said during a farewell ceremony in honour of Kalomoh.

“I look around and I begin to ask myself, who could possibly fill the void you are leaving? We will need someone like you; someone who is always willing to share knowledge and expertise with other colleagues– who is insightful and analytical. We are proud to have worked with you as a colleague and a friend. You are an achiever, who works hard to deliver tangible results. This ministry is better off because of the hard work you and others have put in. Surely at MIRCO, being your workplace, we have met targets and many times we exceeded them.”

She wished him continued good health, peace and happiness in the new chapter of his life.

Kalomoh is a career politician and diplomat who joined Namibia’s struggle for independence at a very young age and served Swapo in various capacities in several countries and institutions in exile.

After independence, he was appointed as the ambassador of Namibia to the USA with concurrent accreditation as High Commissioner to Canada until 1996.

Thereafter, he was appointed as permanent secretary in the ministry of foreign affairs. In 1997, Kofi Annan, then secretary general of the United Nations (UN), appointed Kalomoh as his special representative to Liberia.

He, therefore, organised the holding of elections in Liberia, which ended the seven-year civil conflict in that country. On completion of the Liberian mission, Kalomoh returned to his position of permanent secretary at the ministry of foreign affairs.

In 1998, Kalomoh was appointed as deputy minister of foreign affairs.

At times, he was appointed acting minister of foreign affairs when the then minister, the late Theo-Ben Gurirab, was elected as President of the United Nations General Assembly and had to be based in New York for the entire period.  In 2002, Kalomoh was appointed by Annan as assistant secretary general in the Department of Political Affairs responsible for Africa and the UN Security Council.